How would you teach a mostly illiterate group of people about Christianity in the first century? Most were either illiterate farmers, fishermen, or slaves. Even if they had a Bible, they couldn’t read it. Of course, they didn’t have the Internet, or video and audio recordings either. The dissemination of information in the ancient cultures relied mainly on oral tradition.

So how did the early church teach biblical truths? They created hymns (songs) and creeds that were easy to remember. To understand the concept, does a small child need to know how to read the lyrics in order to sing, “Mary Had a Little Lamb?” Of course not. They learn by singing along with others.

An increasing number of exceptionally influential scholars have very recently concluded that at least the teaching of the resurrection, and perhaps even the specific formulation of the pre-Pauline creedal tradition in 1 Corinthians 15:3-7, dates to AD 30!  In other words, there never was a time when the message of Jesus’ resurrection was not an integral part of the earliest apostolic proclamation.  No less a scholar than James D. G. Dunn even states regarding this crucial text: “This tradition, we can be entirely confident, was formulated as tradition within months of Jesus’ death.” (Habermas, “Tracing Jesus’ Resurrection to Its Earliest Eyewitness Accounts,” God is Great, God is Good (InterVarsity Press, 2009), p. 212. Emphasis Added)

In another article, Dr. Habermas says this…

Critical scholars generally agree that this pre-Pauline creed(s) may be the earliest in the New Testament.  Ulrich Wilckens asserts that it “indubitably goes back to the oldest phase of all in the history of primitive Christianity.”[7]  Joachim Jeremias agrees that it is, “the earliest tradition of all.”[8]  Perhaps a bit too optimistically, Walter Kasper even thinks that it was possibly even “in use by the end of 30 AD . . . .”[9]

Indicating the wide approval on this subject, even more skeptical scholars frequently agree.  Gerd Ludemann maintains that “the elements in the tradition are to be dated to the first two years after the crucifixion of Jesus. . . . not later than three years. . . . the formation of the appearance traditions mentioned in I Cor.15.3-8 falls into the time between 30 and 33 CE. . . .”[10]  Similarly, Michael Goulder thinks that it “goes back at least to what Paul was taught when he was converted, a couple of years after the crucifixion.”[11] Thomas Sheehan agrees that this tradition “probably goes back to at least 32-34 C.E., that is, to within two to four years of the crucifixion.”[12]  Others clearly consent.[13]” (Full article and numbered citations found here. Emphasis added). 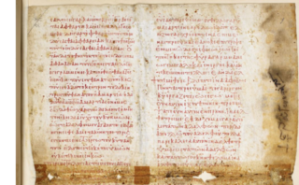 We can see from Habermas that both skeptic and conservative scholars agree that many of these hymns and creeds (especially, 1 Cor.15:3-8) go back to shortly after the crucifixion. This refutes the skeptic’s “Development Theory” that the Gospel was fabricated over time. (See video on this point here.)

Notice that the very heart of the gospel message is included in this earliest creed.  Jesus died for our sins according to the Scriptures, He was buried and was raised on the third day. Then it goes on to list eye-witnesses to His post-resurrection appearances. This is how the early church gave evidence to what they believed.

I will conclude with the following video from the “Reliability of the New Testament” playlist I referenced in my last post. This short clip talks about the oral tradition of the ancient world of first century Christianity. It’s very educational in understanding how and why the early hymns and creeds were used before the New Testament was written down.

NOTE: Please confine your comments to the subject matter of the post and video. Also, please keep your comments concise (under 500 words, preferably much shorter).

God's favorite (and so are you), a son and a father, happily married to the same beautiful woman for 41 years. We have three incredible adult children. My passion is pursuing the Father's heart in Christ and giving it away to others. My favorite pastime is being iconoclastic and trailblazing the depths of God's grace. I'm also senior pastor of Cornerstone Church in Wisconsin.
View all posts by Mel Wild →
This entry was posted in Christian apologetics and tagged Biblical oral tradition, Christianity, New Testament hymns and creeds, Religion and Spirituality, Resurrection. Bookmark the permalink.