A wrong attitude leads to unfruitfulness

In Jesus’ parables that deal with His return, the point is not about what we’re doing when He returns but what we were doing while He was away. The two parables in Matthew 25 are no exception. In both parables, the return of the bridegroom and businessman took longer than expected. It seems that the five foolish virgins and the unfaithful steward both operated out of fear rather than faith. I want to look at the second parable about the talents (bags of gold coins) in particular here, and see how attitude affects our judgment and fruitfulness.

In this parable (Matt.25:14-30), a wealthy businessman gives three of his trusted servants (“employees” in today’s language) a sum of money: the first is given five talents; the second, two talents; the third, one talent. What’s important here is that the businessman gave each “according to his ability to manage” (vs.15). This speaks of our responsibility with the gifts that God gives us, and that He never expects more from us than He thinks we can manage.

As we know from this familiar story, the first two invest their boss’s money and double it. they are both commended as faithful stewards in an identical manner.

“Commending his servant, the master replied, ‘You have done well, and proven yourself to be my loyal and trustworthy servant. Because you have been a faithful steward to manage a small sum, now I will put you in charge of much, much more. You will experience the delight of your master, who will say to you, “Enter into the joy of your Lord!”  (Matt.25:21, 23 TPT)

But then we get to the third servant.

24 “Then the one who had been entrusted with one thousand gold coins came to his master and said, ‘Look, sir. I know that you are a hard man to please and you’re a shrewd and ruthless businessman who grows rich on the backs of others. 25 I was afraid of you, so I went and hid your money and buried it in the ground. But here it is—take it, it’s yours.’ (Matt.25:24 TPT*)

First, notice the servant trying to justify himself. You can hear his passive-aggressive attitude here: “I know that you are a hard man to please and you’re a shrewd and ruthless businessman who grows rich on the backs of others.” He sounds like a Socialist! 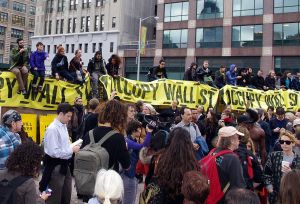 Like many who are without means, he was jealous of the one with means and tried to justify his irresponsible behavior by condemning the businessman who gave him this opportunity. Again, we can relate this directly with the attitude of many today against the rich. They wholesale condemn them with their self-righteous moralizing because they are wealthy.

He then goes on to say, “I was afraid of you.” He thinks he “knows” this businessman but he clearly doesn’t, and so he had the wrong attitude about him. Rather than seeing his boss’s true character, he judged him to be “shrewd” and “ruthless.” We can see the parallel to this in how some people see God this way.

However, the truth was, the businessman simply expected him to be fruitful with his money, which he had every right to do as his employer, but this unfaithful servant took it to mean that the “man” was exploiting his labor. Again, this servant sounds a lot like a Democratic Socialist! He fails to understand that someone can become wealthy by being faithful, hard working, and by providing a valuable service, not because he exploits the poor!

Notice in the following response that Jesus is no Socialist!

26 “But his master said to him, ‘You’re an untrustworthy and lazy servant! If you knew I was a shrewd and ruthless business man who always makes a profit, why didn’t you deposit my money in the bank? 27 Then I would have received it all back with interest when I returned. 28 But because you were unfaithful, I will take the one thousand gold coins and give them to the one who has ten thousand. 29 For the one who has will be given more, until he overflows with abundance. And the one with hardly anything, even what little he has will be taken from him.’ (Matt.25:26-29 TPT*)

Of course, while this parable tells a lot about human nature and faulty attitudes about money, it’s really talking about our attitude toward God’s character and what He expects from us as His trusted stewards.

This parable specifically tells us the danger of judging God wrongly. For instance, if we judge God as being shrewd and ruthless, as the unfaithful servant in this story did, rather than seeing Him as good and generous, giving each of us gifts according to our own ability to manage, we will either become passive, burying our “talent,” abdicating our responsibility as His Kingdom representatives on the earth, or worse, we will become passive-agressive, full of self-righteous anger and spite.

Moral of the story. Let’s make sure we don’t judge God wrongly and justify fear and faithlessness because of a wrong attitude. God is always good, all the time. Invest wisely. Amen.

17 Every gift God freely gives us is good and perfect, streaming down from the Father of lights, who shines from the heavens with no hidden shadow or darkness and is never subject to change. 18 God was delighted to give us birth by the truth of his infallible Word so that we would fulfill his chosen destiny for us and become the favorite ones out of all his creation! (James 1:17-18 TPT)

God's favorite (and so are you), a son and a father, happily married to the same beautiful woman for 40 years. We have three incredible adult children. My passion is pursuing the Father's heart in Christ and giving it away to others. My favorite pastime is being iconoclastic and trailblazing the depths of God's grace. I'm also senior pastor of Cornerstone Church in Wisconsin.
View all posts by Mel Wild →
This entry was posted in Faith and tagged Christianity, Faithfulness, Fruitfulness, Jesus' parables. Bookmark the permalink.

9 Responses to A wrong attitude leads to unfruitfulness