Meet the man who taught us to hate America

If our young people have a generally negative view of America, we can probably put much of the blame on popular textbooks like Howard Zinn’s “A People’s History of the United States,” published in 1980. This textbook has since become the standard source by which Americans learn about their history. But is it an good source?

According to some historical and education experts, the answer is, no. They say we’re teaching our children from a textbook that amounts to anti-American propaganda. For instance, Stanford Professor of Education, Sam Wineburg, wrote an article in the American Educator  listing serious academic problems with Zinn’s work.

The following is from a Stanford News article in 2012 about A People’s History’s ubiquitous influence on our country’s historical narrative:

“In the 32 years since its original publication, A People’s History has gone from a book that buzzed about the ear of the dominant narrative to its current status where, in many circles, it has become the dominant narrative,” Wineburg writes in an article in the latest edition of American Educator, which is now in the mail to its readers. “For many students, A People’s History will be the first full-length history book they read, and for some, it will be the only one.” (read full article here).

To get an idea of Zinn’s personal influences and political leanings, the following is from Wikipedia:

“As a young man, Zinn made the acquaintance of several young Communists from his Brooklyn neighborhood. They invited him to a political rally being held in Times Square. Despite it being a peaceful rally, mounted police charged the marchers. Zinn was hit and knocked unconscious. This would have a profound effect on his political and social outlook.”

“Biographer Martin Duberman noted that when he was asked directly if he was a Marxist, Zinn replied, “Yes, I’m something of a Marxist.” He especially was influenced by the liberating vision of the young Marx in overcoming alienation, and disliked what he perceived to be Marx’s later dogmatism. In later life he moved more toward anarchism.” (Wikipedia) 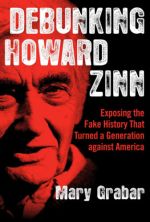 Mary Grabar, currently a Resident Fellow at The Alexander Hamilton Institute for the Study of Western Civilization, and author of “Debunking Howard Zinn: Exposing the Fake History That Turned a Generation against America“(2019), says Zinn’s book is a deeply biased and flawed anti-American polemic, and that Zinn presents an irredeemably corrupt view of the United States. The following points come from the book’s description of Debunking Zinn, where Dr. Grabar unmasks Zinn’s deeply biased assertions about America’s past:

If you’ve never read Zinn’s book, or weren’t taught his ideas about history in school, it may surprise you that anyone would seriously believe such things about America’s history. If you’ve been indoctrinated by Zinn’s work, you may believe his version to be the truth about America.

But, according to Dr. Grabar, Zinn’s writing is surprisingly shoddy for an academic.

“He presents leading questions, often several in a row. He falsified evidence, leaving out key words when quoting sources to give the opposite impression of what they meant. He plagiarized, and not from a book of history but from a book for high school students by a fellow Marxist radical who was a screenwriter and a novelist. This was on Columbus, on which much of Zinn’s claim to fame as a path-breaking historian is based. He also used as sources works of fiction, statements by anonymous people, and a Holocaust-denying historian. He valorizes the Black Panthers and treated the NAACP dismissively. He presented American Indians as “woke” denizens of 1960s communes. He said all women in colonial America were slaves.”

If you’re interested, you can watch the follow lecture by Dr. Grabar on Zinn’s pernicious anti-American propaganda:

You can also watch a longer and more thorough lecture by Dr. Grabar here.

It’s important to state that no serious student of American history would want to minimize the actual evil things that have been done in our nation’s past, but Zinn’s book represents a total misrepresentation of our nation’s history through a Marxist lens. As Grabar said about Zinn’s influence in our classrooms:

“The book used in classrooms today is more than the author’s Marxist agenda, it is falsified history. America is falsely labeled as worse than the Nazis. More accurately, you could say that Zinn’s book is the Mein Kampf of the Hate America Left.”

I don’t think we can underestimate the influence this particular textbook has had on American minds over the last 4o years. My question is, why would we have allowed such a poisonous twisting of history to have so much influence on our children? Is it any wonder that so many young people have a very negative view of our admittedly flawed yet great nation.

I would recommend Dr. Grabar’s book if you want an authoritative resource to push back against the misleading and outright lies told about our nation’s history in Zinn’s book.

God's favorite (and so are you), a son and a father, happily married to the same beautiful woman for 41 years. We have three incredible adult children. My passion is pursuing the Father's heart in Christ and giving it away to others. My favorite pastime is being iconoclastic and trailblazing the depths of God's grace. I'm also senior pastor of Cornerstone Church in Wisconsin.
View all posts by Mel Wild →
This entry was posted in Freedom and tagged American History, Anti-American propaganda, Debunking Howard Zinn, Educational policy, Neo-Marxism, Socialism is Evil. Bookmark the permalink.