Love is not intimidated by darkness 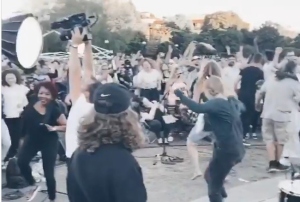 Sean Feucht is no stranger to the darkest areas of the world. He’s ministered God’s love in places like North Korea, Iraq, Afghanistan….and now, Seattle, Washington at Cal Anderson Park, formerly known as the “country” of CHOP, as he continued his “Riots to Revival” tour. Even though Antifa thugs and a satanist cult showed up acting like petulant children, the Seattle church would not be intimidated!

The worshipers held their ground and the atmosphere started to change! An article from God.TV, “Worshippers In Seattle Refused To Be Stopped When Confronted With Knife-Wielding Protesters” gave the following account:

“Violent protesters showed up flashing knives! We had an entire satanic cult march through the worshippers the entire time yelling ‘Hail Satan!’ We had white Antifa yelling & threatening black local pastors! They yelled obscenities and cursed at my wife and kids all night long!” he said.

The worship leader revealed that he had to station 30 bodyguards around him to keep the protesters from disrupting the band. The protesters would try to storm and tackle the band. Eventually, they were able to break the drums, guitar pedals, and generator.”

Despite all of the attempts, Sean saw salvations, healing miracles, and baptisms. “It was on another level!” he wrote. “Yet through it all…SEATTLE NEVER STOPPED SINGING!!!” Feucht said. “THE CHURCH REFUSED TO BE INTIMIDATED AND GOD KEPT POURING OUT!”

According to this article from God.TV, many were ministered to, including a Satanist who came to Christ!

The article also includes a Facebook video clip by a bystander who talks about how much the atmosphere was changed from what he witnessed during CHOP:

“The last time I was here, people were getting shot and killed. It’s such a different vibe here.”

Unlike the destructive violence and chaos witnessed under CHOP’s reign of terror, these people actually were experiencing a “Summer of Love!”

As Feucht said about about the bystander’s comments, “This is exactly why we feel called to bring worship into places of pain, heartache & violence …for moments JUST LIKE THIS when His peace rushes in and is undeniable!”

This is what happens when God’s furious love is released in the most hostile situations. As Feucht has declared, “God is going to flip the script on these cities.”

Here’s a video interview with Sean Feucht on CBN News.

In this interview, Feucht talked about an upcoming rally in Sacramento, California, and he has asked Governor Newsom to attend and even open the event with prayer! (It remains to be seen if the California governor will take him up on his offer.)

Beloved, we need to stop believing the false narrative of fear that darkness is going to win over these cities and our nation. Christ has already defeated tyranny and hate. We fight from victory with His love! We just have to have the courage to stand strong and watch Him show up.

Never has this prophetic word over God’s people been more important for us to remember than the time we’re living in now:

God's favorite (and so are you), a son and a father, happily married to the same beautiful woman for 40 years. We have three incredible adult children. My passion is pursuing the Father's heart in Christ and giving it away to others. My favorite pastime is being iconoclastic and trailblazing the depths of God's grace. I'm also senior pastor of Cornerstone Church in Wisconsin.
View all posts by Mel Wild →
This entry was posted in Love, Worship and tagged CHOP Seattle, Christianity, Let Us Worship, Riots to Revival, Sean Feucht. Bookmark the permalink.

2 Responses to Love is not intimidated by darkness