Those who oppose their own souls

A funny thing about human beings. We will only hear what our heart is open to hearing. A closed heart can make you believe and do very foolish and harmful things. This is what the religious spirit and the political spirit do to us. They make us think emotionally rather than rationally. It’s what drives the cancel culture today. We simply will not tolerate what we don’t want to hear.

The very thing that would heal our wounded soul could be the very thing we’re vehemently fighting against. It’s the proverbial cut your nose off to spite your face. One example: when I was appointed as senior pastor of our church many years ago (after the former pastor had resigned), I wanted one of the former staff pastors to continue on with me in a position that would’ve been perfect for him. But because he was angry about the transition, he left and told everyone I fired him (which made several other people angry at me). It wasn’t until years later that he admitted that what he had thought he heard was wrong. What he heard was “rejection” because that’s what his wounded soul was telling him.

A closed heart might even make us think we’re doing God a service when we’re actually fighting against Him. This was the case with the religious leaders who came against Jesus. I like how the Passion Translation brings this out in Hebrews 12:

3 So consider carefully how Jesus faced such intense opposition from sinners who opposed their own souls, so that you won’t become worn down and cave in under life’s pressures. (Heb.12:3 TPT*) 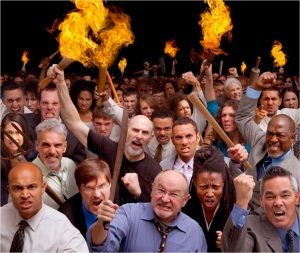 This is the reptilian ‘GroupThink’ of the angry mob, and the nature of endless arguments and heated debates. Our fear-based anger over perceived injustices or need to be always right and protect our fragile pride is the very thing that stops our hearts from hearing…and ironically, from finding freedom or justice. Fear of the mob also makes us rationalize lies.

It’s also one reason why I believe Jesus could sincerely ask His Father to forgive His persecutors. They had stopped their ears and had made themselves blind because what they were looking for didn’t come in a way they expected.

Because of these things, the people who opposed Jesus, who thought by opposing Him they were serving God, became their own worst enemy. For they were railing against the very freedom they were hoping and praying for.

This is the sad commentary for those who will not hear:

14 And in them the prophecy of Isaiah is fulfilled, which says:

A verse I often quote on my blog is Proverbs 4:23:

23 Guard your heart above all else,
for it determines the course of your life. (Prov.4:23 NLT)

Notice that it doesn’t say that we should guard our religious dogma or political ideology. It says, guard your heart—the gatekeeper to your soul. Your heart is the rudder by which you navigate the course of your life. And the condition of your heart determines the quality of that life.

Keep your heart open, free from offense, so that you see and hear things as they are, not as you might perceive them to be.  The path to continual spiritual growth is to always be teachable, pliable, ready to understand instead of demanding to be right.

And we can do this without compromising the truth, because the Truth is a Person. The truth that frees us is revelatory and relational. From our human standpoint, truth is progressive in our understanding because it’s much bigger than the echo or of our own thoughts and opinions. God never changes…but we must!

We also see Hebrews 12:3 above that we should not become weary because people’s hearts are not open to us. They may even hate us. Our main concern is our own heart. Are we open to the truth?

Beloved, do not be like those who oppose their own souls. Don’t be led by circumstances, be led by the Spirit. You will never regret it!

God's favorite (and so are you), a son and a father, happily married to the same beautiful woman for 41 years. We have three incredible adult children. My passion is pursuing the Father's heart in Christ and giving it away to others. My favorite pastime is being iconoclastic and trailblazing the depths of God's grace. I'm also senior pastor of Cornerstone Church in Wisconsin.
View all posts by Mel Wild →
This entry was posted in Freedom, Grace and tagged Cancel culture, Christianity, Relationships, Social justice, Spiritual maturity. Bookmark the permalink.

9 Responses to Those who oppose their own souls