Why we still need reformation

We need to stop making God’s redemptive purpose about forgiveness; God’s eternal purpose has always been about adoption.

God is a Father and He’s always wanted sons and daughters. Forgiveness of sin was only the means to accomplish this goal.

4 For he chose us in him before the creation of the world to be holy and blameless in his sight. In love 5 he predestined us for adoption to sonship through Jesus Christ, in accordance with his pleasure and will (Eph.1:4-5 NIV)

We need to stop describing God, first and foremost, as sovereign. God, first and foremost, is love (1 John 4:8). Love is not an attribute of God; it’s His very essence—who He is at the core of His being, apart from His creation. And Love is other-centered and self-giving, which is why He creates. It’s only in this context that we can talk about the nature of His sovereignty or any other attribute of God.

We need to stop inserting Stoic and Gnostic determinism into our ideas about God’s sovereignty (that He micromanages everything, controlling every detail of our life). This form of “Theological Fatalism” is not only not found in Scripture, it’s unjust, logically incoherent, the very opposite of any meaningful sense of freedom, and untenable with the nature of love. It makes God the author of evil and negates our response-ability as free moral agents. (I’ll let Dr. Leighton Flowers explain further in this video.)

We need to stop saying that human beings are totally depraved when, according to the Bible (and every church father before Augustine), human beings are made in the image of God (Gen.1:26), capable of doing good (Rom.2:12-15; Gal.2:15), although corrupted by the fall and in need of salvation. 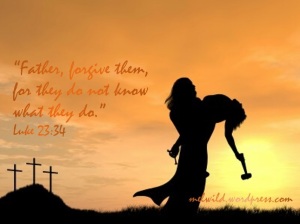 We need to stop our blame-shifting, turning God the Father into a cosmic child-abuser.  We evangelicals have gotten the crucifixion backwards for too long. It wasn’t God who killed Jesus; we did, which exposed our religious scapegoating and corrupted nature. God took our “tragic flaw” to the grave so that we could be healed and restored back to Him (see “Why we needed fixing.”)

We need to stop saying that God cannot look at our sin so He had to abandon Jesus on the cross. Nothing could be further from the truth! Not only did Jesus—God the Son—countenance sin during His ministry, the Father was IN Christ reconciling the world to Himself (2 Cor.5:19). Furthermore, Jesus, speaking of His crucifixion, declared that even though His own followers would abandon Him, His Father would never abandon Him (see John 8:28-29;16:32). 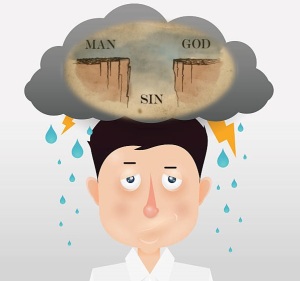 We need to stop saying our sin separates God from humankind when it’s the other way around. Adam and Eve were the ones hiding in the bushes while God was seeking fellowship after they sinned. It’s our orphan-hearted guilt and shame that keeps us separated, preferring darkness to the light that would free us (John 3:18-21).

Again, we have it all backwards. We were alienated from God and enemies in our minds….

21 Once you were alienated from God and were enemies in your minds because of your evil behavior. (Col.1:21 NIV*)

WE were the ones who needed reconciling to God, not God to us…

19 that God was reconciling the world to himself in Christ, not counting people’s sins against them. And he has committed to us the message of reconciliation. (2 Cor.5:19 NIV*)

We need to stop mixing the Old Covenant with the New (“pouring new wine into old wineskins”) because they’re incompatible. Once you’ve received the latter (Christ) the former is no longer necessary (see Gal.3:24-25).

We need to stop inventing theology that produces fruit that doesn’t look like Jesus. If what we believe doesn’t lead us to become more loving, gracious, behaving and treating others, including sinners, exactly like Jesus did, it is a false theology (John 1:18; 14:7, 12, 20:21; Eph.4:15; Heb.1:1-3).

We need to stop describing God as a judge in the Western Roman jurisprudence sense, meaning, a court of law with a modern-day judge passing down punishments for infractions of rules. God, as judge in the Hebraic sense, is a deliverer; one who sets people free from oppression, bondage, and injustice.

To understand the biblical nature of God as judge, simply read the book of Judges. We don’t need to interject our Western legalistic mindset on to how Scripture describes His nature as judge.

16 But then Adonai raised up judges, who rescued them from the power of those who were plundering them. (Judges 2:16 CJB*)

We need to stop making it about “us vs. them” with our non-biblical dualistic mindset, polarizing and dividing ourselves according to doctrinal agreement, separating sinners from God, even separating heaven from earth. This separation is also only between our ears (See Luke 17:21; John 17:21-24).

We need to stop abdicating our role as stewards of this earth (Gen.1:26-28) and start helping to make it a better place to live for everyone.

These are just a few thoughts I had about the popular evangelical message today. These points (and others) have a profound affect on how we understand God and how people perceive the Good News that’s supposed to bring great joy. I think our theology and message still needs some work.

God's favorite (and so are you), a son and a father, happily married to the same beautiful woman for 40 years. We have three incredible adult children. My passion is pursuing the Father's heart in Christ and giving it away to others. My favorite pastime is being iconoclastic and trailblazing the depths of God's grace. I'm also senior pastor of Cornerstone Church in Wisconsin.
View all posts by Mel Wild →
This entry was posted in Father Heart of God, Reformation, Sonship, Theology and tagged atonement, Christianity, Jesus, Reconciliation, Salvation, The Good News. Bookmark the permalink.

15 Responses to Why we still need reformation