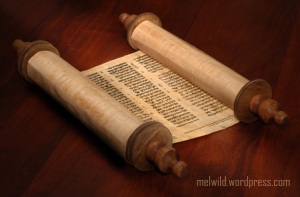 There has never been one moment in time when Gentiles (non-Jews) have been under the Law of Moses. That was a covenant between God and Israel. No Gentile was expected to follow the Mosaic covenant, even when it was in effect, so why would we Gentiles be required to follow it under a new covenant based on better promises? (Heb.8:6) It’s actually mind-boggling to me.

Of course, as Paul, said, we who are not under the Law are judged by our own conscience (Rom.2:14-16). But the point is, we have never been under the Law of Moses.

This is why it’s astonishing to me that so many Christians think they need to still follow the Law of Moses. It’s actually sad because they’re totally negating the power of the Gospel. Frank Turek tries to explain this to someone who just doesn’t seem to get this in the following clip:

Since we’re approaching Easter this particular subject is timely as we continue looking at the first two chapters of Ephesians where we’re seeing why the gospel is the good news that brings great joy. In this installment we start with Ephesians 2:11-13:

11–12 So don’t forget that you were not born as Jews and were uncircumcised (circumcision itself is just a work of man’s hands); you had none of the Jewish covenants and laws; you were foreigners to Israel’s incredible heritage; you were without the covenants and prophetic promises of the Messiah, the promised hope, and without God.

While we Gentiles weren’t under the Law of Moses, we were certainly alienated from God…“you were without the covenants and prophetic promises of the Messiah, the promised hope, and without God.”

In other words, we were spiritual orphans. But it doesn’t end there!

13 Yet look at you now! Everything is new! Although you were once distant and far away from God, now you have been brought delightfully close to him through the sacred blood of Jesus—you have actually been united to Christ! (Eph.2:13 TPT *)

Here’s the good news that brings great joy. The New Covenant was cut between the Father and Jesus. (Gal.3:15-18) And Jesus already fulfilled it with His death (Rom.7:1-6). That means you cannot break it. Yay God!

The only thing you can do is believe what has been done to you and “walk in the newness of the Spirit,” which is resurrection power!

Don’t get me wrong. I absolutely love the Old Testament. In fact, more so now that I’m no longer reading it like an orphan. But I know now that if I don’t read it through the lens of Jesus Christ, I’m reading it wrongly. I’m believing a lie, a different gospel, and I have put myself under a curse (Gal.1:6-8). I did this for 20 years of my evangelical Christian life and it wasn’t good news!

Am I under the Law? Absolutely! But which Law? The Law of Moses? NO WAY! 🙂 I’m under “the law of the Spirit of life in Christ Jesus” (Rom.8:1-2). God has written Himself into my heart. It’s the Law of other-centered self-giving love, which was the only law God ever wanted to give us in the first place.

Paul continues on in Ephesians 2….

14 For He Himself is our peace, who has made both one, and has broken down the middle wall of separation, 15 having abolished in His flesh the enmity, that is, the law of commandments contained in ordinances, so as to create in Himself one new man from the two, thus making peace, 16 and that He might reconcile them both to God in one body through the cross, thereby putting to death the enmity. 17 And He came and preached peace to you who were afar off and to those who were near. 18 For through Him we both have access by one Spirit to the Father. (Eph.2:14-18*)

First, Paul says the Mosaic Law constituted a “middle wall of separation” between Jews and Gentiles. It was actually the Law that separated us from God.

But then Paul says Christ has made us one “new man.” This is not about gender; it’s about relationship. The point is, there’s no longer any difference between Jew and Gentile, or gender, or any other status you can come up with, as far as your standing in Christ goes. This is what Paul was trying to get the foolish Galatians to see:

Beloved, you’re not a religious orphan, so don’t act like one. Don’t read the Bible like one. God is your Father and you’re a new creation, an unprecedented species in human history. You’re a dual-realm citizen of heaven, living from heaven to earth (Phil.3:20). You’re not part of the first Adam anymore. That Adam died on the Cross and your life is in the Last Adam now!

4 But when the fullness of the time had come, God sent forth His Son, born of a woman, born under the law, 5 to redeem those who were under the law, that we might receive the adoption as sons.

6 And because you are sons, God has sent forth the Spirit of His Son into your hearts, crying out, “Abba, Father!” 7 Therefore you are no longer a slave but a son, and if a son, then an heir of God through Christ. (Gal.4:4-7*)

This is who you are. You’re not a slave, Neo. Don’t be like the religious Galatians who tried to live under a powerless covenant that only produces death. Enjoy your new life in Christ! It’s infinitely better than you can imagine.

God's favorite (and so are you), a son and a father, happily married to the same beautiful woman for 40 years. We have three incredible adult children. My passion is pursuing the Father's heart in Christ and giving it away to others. My favorite pastime is being iconoclastic and trailblazing the depths of God's grace. I'm also senior pastor of Cornerstone Church in Wisconsin.
View all posts by Mel Wild →
This entry was posted in Freedom, Grace, Identity, Sonship and tagged Christianity, Jesus, New Covenant, orphan Christianity, The Good News, transformation. Bookmark the permalink.

7 Responses to No longer orphans