When I heard God’s voice

I still remember the time in 1982 when I realized that I was hearing God speak to me for the first time. It was quite unintentional and surprising. Understand that I wasn’t the type that thought everyone who said they heard God was credible. I was actually quite skeptical at the time.

It happened at a meeting we were attending. It was a small independent Charismatic church plant that my brother-in-law had invited my wife and me to. We had been going for a few weeks at the time and on this particular evening during the worship as I was deep in thought, rocking my newborn son to the music, all of a sudden a lady next to us stood up and gave a prophetic word. Now, that wasn’t what was shocking to my neophyte ears. It was that she was saying, almost verbatim, what I thought I was thinking! I just stared at her. How could this be? At first I thought she must be a mind-reader or have ESP or something crazy like that. I had never experienced anything like that before.

But then it dawned on me. God had been speaking to me and He was using my inner-voice to do so. I don’t think I heard a word the pastor said for the rest of the night. I just sat there pondering what had just happened.

Of course, this shouldn’t have been surprising to me. Even though I was still pretty ignorant about the Bible at the time, I knew enough to know that Jesus said His sheep would hear His voice. Did He really mean this?

2 The one who enters by the door is the shepherd of the sheep. 3 The doorkeeper opens the door for him, and the sheep hear his voice. He calls his own sheep by name and leads them out. 4 When he has brought all his own sheep out, he goes ahead of them, and the sheep follow him because they recognize his voice. 5 They will never follow a stranger, but will run away from him, because they do not recognize the stranger’s voice.” (John 10:2-5 NET) 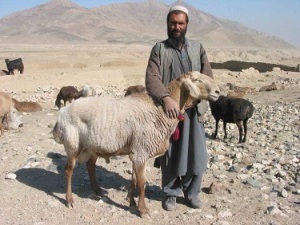 I’ve been to Israel a couple of times now and have marveled at how the Bedouin shepherds lovingly work with their sheep. I shared a story here where Jesus’ analogy of sheep only following their shepherd’s voice was actually witnessed by a pastor named Griffiths Thomas.

Back to that night in 1982, this initial encounter was life-changing for me. I had believed in God before, but now He was no longer some distant God of the Bible. I now knew that He knew me personally and was speaking to me, and so I began to want to know Him more intimately. I’ve been on that wondrous adventure ever since. What’s funny is even when I went through a time where I was mad at God and didn’t want to talk to Him, I knew He was there. And He was…listening…patiently waiting.

I have since found out that this is probably the most common way God speaks to us, even though we may not be aware of it. Of course, He can speak to us through the Bible, hearing a message, but He also wants to speak to us personally…if we will just learn how to listen. And He almost always sounds like our inner voice. There are various ways we can distinguish our thoughts from God’s voice to verify it’s Him, but the point here is that He is speaking.

This first encounter was 36 years ago. Since then, God has confirmed Himself to me too many times to count. And I think this is important for us who believe because there are lots of other voices trying to tell us that our faith in this invisible God is a waste of time, and that He’s not real. But, as Bill Johnson put it, “A man who has an encounter is never at the mercy of a man with an argument.”

I was thinking about this as I watched Dr. Jim Wilder‘s testimony (see video clip below). Dr. Wilder was trained in clinical psychology and specializes in brain science. He’s also a theologian (who calls himself a “Neurotheologian”) and co-author of “Rare Leadership:  4 Uncommon Habits For Increasing Trust, Joy, and Engagement in the People You Lead,” which is a book I highly recommend, by the way. He shares a similar experience on the video that helped him resolve his doubts about God when he was a young adult in college. He also shares some other interesting insights near the end of the video. I think you’ll find the whole thing well worth watching.

Beloved, God is always speaking to you. And He will show you this if you will but open your heart to it and ask.

God's favorite (and so are you), a son and a father, happily married to the same beautiful woman for 39 years. We have three incredible adult children. My passion is pursuing the Father's heart in Christ and giving it away to others. My favorite pastime is being iconoclastic and trailblazing the depths of God's grace. I'm also senior pastor of Cornerstone Church in Wisconsin.
View all posts by Mel Wild →
This entry was posted in Faith and tagged Christianity, Hearing God, Personal testimony. Bookmark the permalink.

94 Responses to When I heard God’s voice