Are we becoming more secular? 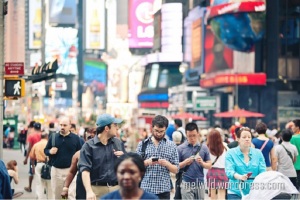 According to secular evangelists, religion and Christianity is shrinking in the world and secularization is growing. I also hear this all the time from militant anti-theists, as if it were true. Recently, a Huffington Post article by secularist professor, Phil Zuckerman titled, “Religion Declining, Secularization Surging” was mentioned.

I found it to be an interesting example of cherry-picking data to fit the desired conclusion. For instance, Zuckerman gleefully reports the following:

“Finally, the sheer number of secular men and women on planet earth is unprecedented — according to the Pew Research Center’s latest estimates, there were over 1.1 billion non-religious people in the world in 2010, and that number is expected to increase to over 1.2 billion by the year 2020.”

While it’s true what Pew Research said about the projection of non-religious people by 2050 (he misquoted the study by saying 2020), that’s not the whole story. Here’s what the same research also said:

“In 2010, censuses and surveys indicate, there were about 1.1 billion atheists, agnostics and people who do not identify with any particular religion. By 2050, the unaffiliated population is expected to exceed 1.2 billion. But, as a share of all the people in the world, those with no religious affiliation are projected to decline from 16% in 2010 to 13% by the middle of this century.” *

But then the report goes on to say the following:

“If current demographic trends continue, however, Islam will nearly catch up [to Christianity] by the middle of the 21st century. Between 2010 and 2050, the world’s total population is expected to rise to 9.3 billion, a 35% increase. Over that same period, Muslims – a comparatively youthful population with high fertility rates – are projected to increase by 73%. The number of Christians also is projected to rise, but more slowly, at about the same rate (35%) as the global population overall.” *

So, while secularization will drop 3% with respect to world population, Islam will double in percentage (mostly from high birthrate) and Christianity will keep pace with the world population growth (35%).

So, I’m honestly puzzled why Zuckerman is so giddy about these reports. Not exactly a secular tidal wave.

Of course, it’s not debatable that there has been a decline in overall Christian adherents over the last few decades. But we must ask where this decline is coming from. If we dig deeper into the data a pattern seems to immerge, at least in the US.

For instance, in a USA TODAY article titled, “Survey Fail: Christianity isn’t Dying“, Ed Stetzer points out that while the total number of those affiliated with Christianity declined, Evangelical Christianity is growing in America. From 2007 to 2014 the number of evangelicals in America rose from 59.8 million to 62.2 million, according to Pew.

So, where is the exodus coming from?

According to Pew, unaffiliated Americans grew from 16 to nearly 23% in the last seven years. That increase largely came from the ranks of Catholics and Mainline Protestants, religious traditions with high numbers of nominals. Among adults who claim no religious affiliation, 28% were raised Catholics, while 21% grew up Mainline. *

Stetzer summarizes the reason for the decline:

“Many of these who have been labeling themselves as Christians are starting to feel free to be honest about their religious affiliation, or lack thereof. “

In other words, the nominal, cultural “Christians,” who aren’t much different than practicing atheists, are coming out of the closet, so to speak. But those who hold a vibrant faith are going strong.

“So, the number of people who are practicing a vibrant faith is not fading away, quite the contrary. Christianity and the church are not dying, but they are being more clearly defined. Both the recent Pew and GSS data affirm this clarification should only continue.” *

Stetzer ends with what I believe is a more accurate summation of what’s going on:

“Nominal Christians are becoming the nones and convictional Christians remain committed. It is fair to say we are now experiencing a collapse, but it’s not of Christianity. Instead, the free fall we find is within nominalism.” *

Furthermore, a new Harvard Study also challenges the idea that Christianity is fading away in the U.S. According to Glenn Stanton of The Federalist (“New Harvard Research Says U.S. Christianity Is Not Shrinking, But Growing Stronger“):

“The percentage of Americans who attend church more than once a week, pray daily, and accept the Bible as wholly reliable and deeply instructive to their lives has remained absolutely, steel-bar constant for the last 50 years or more, right up to today. These authors describe this continuity as “patently persistent.” *

To sum up, what we’re seeing is not an actual decline in the vibrant and genuine Christian faith but mainly an exodus of the nominal, cultural Christians who no longer want to continue their façade of being a “Christian.”  Despite this temporary trend as Christianity becomes more clearly defined, the growth of believers around the world will continue to outpace secularists by a wide margin.

So, the next time you hear this kind of popular secularist/atheist propaganda, be skeptical. Question everything. Research it yourself. And remember that “Of the greatness of his government and peace there will be no end.” (Isa.9:7)

God's favorite (and so are you), a son and a father, happily married to the same beautiful woman for 40 years. We have three incredible adult children. My passion is pursuing the Father's heart in Christ and giving it away to others. My favorite pastime is being iconoclastic and trailblazing the depths of God's grace. I'm also senior pastor of Cornerstone Church in Wisconsin.
View all posts by Mel Wild →
This entry was posted in Christian apologetics and tagged Atheist myths, Christianity, Religion and Spirituality. Bookmark the permalink.

68 Responses to Are we becoming more secular?