Testimony from a former astrophysicist

This post is a continuation of my informal apologetic look at theism in general and Christianity in particular. I haven’t gotten into revealed theology yet.

So far, I’ve been accused by a few atheists of being dishonest, disingenuous, deceptive, hypocritical, practicing avoidance behavior and bait and switch, and generally being a dullard because I’m obviously not intelligent enough to understand their concise points (tongue firmly in cheek, they’re anything but concise!) and their unassailable arguments.

I so look forward to what I will be accused of with this new post. Oh, what fun! 🙂

In the last post we looked at the confusion surrounding how we make a conclusion about the possibility of design or agency. I think the 200+ comments proved the author’s point about how confused some atheists are about the argument for design.

This is what was said in the video:

When we look at claims for things that are, by definition, outside the natural world, we obviously cannot do a scientific experiment. That would be like “show me the empirical proof in space-time” for something that exists outside of space-time!” It is simply nonsense. 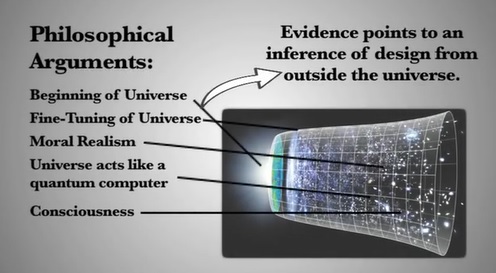 Natural theology does not attempt to prove a designer exists, like one proves a scientific fact through measurement or observation. Rather these philosophical arguments take the evidence we can evaluate (the Universe has a beginning, fine-tuning, moral realism, the Universe acts like a quantum computer, consciousness, etc.) to reach the most rational inference of something outside the universe to explain things where science cannot go because the logical mind seeks the most rational inference to the evidence. The evidence points to an inference of design from outside the universe.” (emphasis mine)

I’m not going to go into the epistemological and ontological arguments because, frankly, this series would go on forever. Again, you can go to YouTube channels like “InspiringPhilosophy” to learn how theists argue these things.

But before we move on, understand that I’m still not to the point of talking about revealed theology, even though these videos include a Christian testimony. So trying to goad me in that direction will be an exercise in futility.

I want us to look at one more position from natural theology to infer a designer by sharing a testimony from a former astrophysicist and current Christian apologist, Dr. Hugh Ross.

Dr. Ross earned a B.Sc. in physics from the University of British Columbia and an M.Sc. and Ph.D. in astronomy from the University of Toronto; and he was a postdoctoral research fellow for five years at Caltech, studying quasars and galaxies. In 1986, he founded “Reasons to Believe,” a ministery dedicated to Christian apologetics.

Two points before we go to the video:

First, Dr. Ross is an old-earth creationist. I fully realize that many of my Christian brothers and sisters do not agree with this position. There are Scriptural reasons for his position but that’s not my point (and using him doesn’t mean I have to agree with every doctrinal point he makes either). Regardless, his is a valid position within the Christian faith. If you would like more on my position on this, you can read my post, “Does it really matter how old the earth is?“

Second, I’m fully aware that you skeptics are probably rolling your eyes right now, thinking you’ve already dismissed (“debunked”) the likes of Dr. Ross. You’re certainly entitled to your opinion, but spare me your ridicule. The truth, whatever it may be, doesn’t care whether you accept it or not. And Ross is an expert in his field. You are free to disagree but you cannot rightfully dismiss him as a scientific hack.

With that said, here are two video with Dr. Ross. The first one is a short testimony about how he became a Christian through scientific inquiry (in spite of his culture). The second video is a longer testimony, including his explanation of how the creation account in Scripture led him to faith in God.

Longer testimony (includes some of his cosmological arguments from Scripture):

NOTE: Please confine your comments to the subject matter on the video. Also, please keep your comments concise (under 500 words, preferably much shorter).

God's favorite (and so are you), a son and a father, happily married to the same beautiful woman for 40 years. We have three incredible adult children. My passion is pursuing the Father's heart in Christ and giving it away to others. My favorite pastime is being iconoclastic and trailblazing the depths of God's grace. I'm also senior pastor of Cornerstone Church in Wisconsin.
View all posts by Mel Wild →
This entry was posted in Christian apologetics, Theology and tagged cosmology, Dr. Hugh Ross, Personal testimony, Religion and Spirituality. Bookmark the permalink.

36 Responses to Testimony from a former astrophysicist