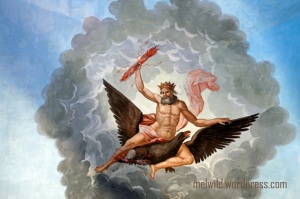 Whenever I get into a thoughtful discussion with one of my agnostic friends (or honest inquirers) about how they see God, they usually respond with some picture of a stern-faced deity up in heaven, lightning bolts in hand, ready to punish all who anger Him.

Of course, the description they’re giving me is of Zeus, not the God of the Bible.

Sadly, this isn’t far off from what a lot of Christians believe about God. And all of these people infer this from Scripture. Especially, about the God of the Old Testament.

But here’s the real interesting part: none of them think of Jesus this way, even though He’s said to be the exact representation of God (John 14:7; Heb.1:3).

As I’ve said in the past, this conflicted view of God happens whenever we read the Bible indiscriminately. In other words, if the genocidal God of Joshua and the sinner-loving God of Jesus are different in any way, we are the ones who need to change our view of Him. Because, taken literally, God cannot be both.

Mythology is a collection of widely held but false beliefs having to do with religious or cultural traditions. And we have lots of mythology in our evangelical traditions!

We tend to call our Bible text the Word of God; the apostolic church called Jesus Christ the Word of God. In fact, they didn’t have our “Bible,” and what they called Scripture included books and letters that we don’t.

This brings up an important side point. Your theology is not God. In fact, your Bible is not God (John 5:39). God Himself is God. Our interpretations of Him are often something else, and as long as we’re confused about this we’ll never be able to grow in a spiritually healthy way. We’ll only listen to teaching we already agree with, calling anything that disagrees with our theology “unbiblical.” But that’s another subject for another time.

The reason this is important is because when we try to figure out who God is by doing a word study, we end up collecting a hopelessly conflicted list of adjectives about the nature of God…especially about the Trinity. God becomes a Dr. Jekyll and Mr. Hyde deity with some unsettling anger-management issues. 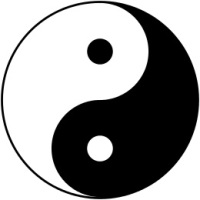 When we try to “balance out” God, making Him loving and gracious, but also legalistically “holy,” retributive, and even hateful, we create a god of pagan mythos.

We end up with a friend of sinners whose eyes are too pure to look at sin. God who never changes, but apparently He does with Jesus. He supposedly abandoned Jesus on the Cross, even though He said he’ll never leave us or forsake us. Jesus tells us to do what God doesn’t do Himself. His love is unconditional as long as His conditions are obeyed. He’s the Savior of the whole world, who shows no partiality, but damned certain people to hell before they were ever born.

This is precisely the argument atheists make against the “God of the Bible.” Ironically, they get this by reading the Bible exactly the same way many “Bible-believing” Christians read it! We’re just not as honest about the conclusions.

I’m sure you’ll want to argue with some of my observations. Perhaps I’m painting the picture unfairly. Maybe so, but my point is still valid.

When we have a “flat” view of the Bible (all words are given the same weight as full revelation of God throughout), we fail to realize that Jesus was actually subversively deconstructing what His own people thought God was like.

Jesus often quoted Old Testament passages, leaving out parts that made God look retributive. The apostles did the same thing.  But first century Israel saw Messiah as a militaristic avenger, coming to crush their Roman oppressors. Jesus showed them an enemy-loving, forgiving Father who came to put an end to the scapegoating oppression in them…and in us.

Of course, that’s what got Him crucified.

I’ve asked this many times on this blog…do we realize what Jesus is saying here? He’s saying that no one really knew God except Him! Abraham didn’t know God, not Moses, not Samuel, not David…. Let that sink in for a moment. While they certainly had a relationship with Him, it was through the darkened veil of Adam, not the revealed light of Jesus Christ. This is significant because it’s this “Jesus-lens” that’s the only way we’ll ever understand God rightly.

Like with the two on the road to Emmaus (Luke 24:25-27), when I let Jesus walk me through the Scriptures, I find that, from the fall of Adam to Jesus, it tells me more about myself than about God…how mankind experienced God, not God as He really was. It tells me how I’ve painted my heavenly Father with Satan’s brush, creating a distorted image that’s different than Jesus. If I don’t understand this I will project my own reflection onto God and create even more “Christian” mythology.

We’ll venture further down this theological rabbit hole another time. For now, I would be interested in hearing what you think about this.

God's favorite (and so are you), a son and a father, happily married to the same beautiful woman for 41 years. We have three incredible adult children. My passion is pursuing the Father's heart in Christ and giving it away to others. My favorite pastime is being iconoclastic and trailblazing the depths of God's grace. I'm also senior pastor of Cornerstone Church in Wisconsin.
View all posts by Mel Wild →
This entry was posted in Doctrine, Theology and tagged Christian mythology, Christianity, Christology, Hermeneutics, Interpretation of Scripture, Religion and Spirituality. Bookmark the permalink.

21 Responses to Deconstructing our Christian mythology