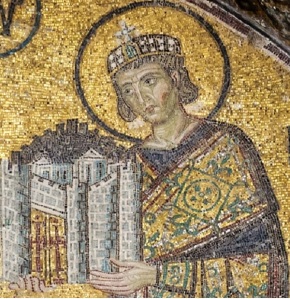 I would like to continue where I left off with my last post about how Jesus’ subversive teachings challenge our “normal.” This time, I would like to look at where some of this disconnect comes from.

To help with this effort, I’ve included a short video from Greg Boyd where he talks about how the Roman emperor, Constantine, dramatically changed our understanding of Christianity.

His points confirm something that profoundly impacted me while I was reading the writings of the earliest Church fathers (pre-fourth century), that their idea of Christianity was radically different than ours today.

The pre-fourth century Christians saw Christ’s teachings as subversive to the world they lived in. As Boyd points out, their God would rather be slain by His enemies than slay His enemies. Most of these counter-cultural Christians overcame, literally, by not loving their lives unto the death (Rev.12:11). Their enemy was not seen as flesh and blood, but principalities and powers in heavenly places (Eph.6:12). They understood that their fundamental job was to imitate Christ’s love for all humanity, not the Roman culture they lived in.

But then, in the fourth century, something terrible happened. Christianity became the state religion of the Roman Empire, after Constantine’s alleged conversion. Christianity became a world religion for the first time. Buildings became the “church” instead of the people being the church. The priesthood became the clergy instead of every believer, along with many pagan influences that are beyond the scope of this post. The point is, we entered into a very dark time that still deeply affects us. 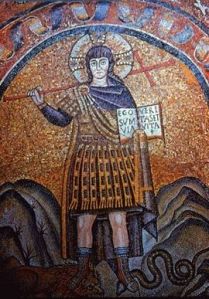 Christ was now depicted in paintings as the conquering hero with Caesar’s battle dress on (as the picture shows) instead of the slain Lamb. But, as Boyd points out in the video, when you pick up the sword you put down the cross.

All enemies of the Roman Empire were now enemies of Christ. All Roman wars became holy wars. Some of the early Popes actually led armies into battle. This was the unholy marriage of political power and the Church. What’s ironic here is that this is what happens when we don’t have a separation between church and state!

The Holy Roman Empire was the Kingdom of God on earth, but now we call it “Christendom.” And all who believed otherwise were vanquished by the sword. Other religions were marginalized and treated like second-class citizens…or killed. Heathen nations and whole people groups were subjugated and trampled underfoot for the glory of God and converted to this triumphalistic religious invention.

This continued even after the Reformation, only now the wars and killings are between Christians—Catholics and Protestants—all of which greatly influences our European and American Christian worldview. Honestly, it’s in this way that we can say America was founded as a “Christian nation.”

To be fair, a lot of good things also happened because of Christendom’s influence. There were many bright spots in the midst of its awful legacy, including many of the human rights and privileges all people enjoy today. We should be thankful for that and continue on that trajectory.

Nonetheless, to use Boyd’s analogy, like fish that can’t perceive what’s wrong with the water they swim in, we don’t see how insidiously pervasive this pagan mindset is to our own view of Christianity.

We still look to government to legislate our Christianity over other people who believe differently. We still see other ideologies as our enemy and violence as the ultimate means to bring peace. We still want to make the world safe from people not like us. 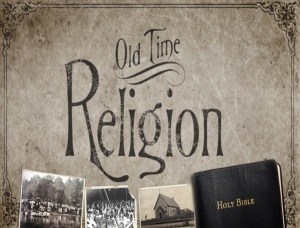 Another thing that strikes me as ironic is that this “Christendom” stronghold is actually crumbling in our culture, which should be seen as a good thing, yet we evangelicals seem to be the ones thrown into a tizzy over “what’s happening to our country,” desperately trying to prop it back up! Don’t we see this? Are we so oblivious to the polluted water we’ve been swimming in?

Dare I suggest…what if God is behind this crumbling? What if it’s His mercy and grace at work, and He’s restoring us and upgrading our Christian worldview to a more Christ-like worldview? Shouldn’t we be the ones rejoicing?

Not that we want evil to reign in our culture, but I really don’t think anyone else wants that either, regardless of their beliefs. What we should want is to think and act more like Christ, not the pagan Constantine. We should want to love even the worst sinners like Jesus did….yes, even those who call us their enemies (Matt.5:43-46).

So, on that note, please watch this short video with Greg Boyd. He does a great job outlining how Constantine influenced what we call Christianity today.

And look up, really good things are happening!

God's favorite (and so are you), a son and a father, happily married to the same beautiful woman for 41 years. We have three incredible adult children. My passion is pursuing the Father's heart in Christ and giving it away to others. My favorite pastime is being iconoclastic and trailblazing the depths of God's grace. I'm also senior pastor of Cornerstone Church in Wisconsin.
View all posts by Mel Wild →
This entry was posted in Reformation, The Shift and tagged Christian history, Christianity, Constantine and Christianity, Greg Boyd, Religion and Spirituality, Violence. Bookmark the permalink.

11 Responses to How Constantine changed Christianity