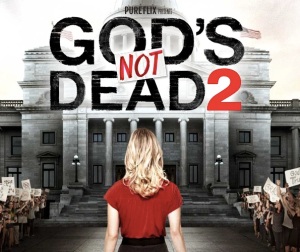 First, my disclaimer. This is not a review of the movie, God’s Not Dead 2. While I’ve seen God’s Not Dead, I haven’t seen the sequel (both movies by Pure Flix Entertainment.)

Having said that, here’s my take on movies like GND2 in one sentence.

I don’t think we “church folk” have a handle on the way the world actually views us.

If we think these kinds of movies are going to endear us to the people Jesus is trying to reach through us, we may be in for a big disappointment. While apologetic-driven movies like GND2 encourage the “churched,” they may actually be detrimental to our witness to those outside the faith.

Rather than showcasing the good news that brings great joy—that Jesus took our brokenness and has received us into His life—we come across as victims with a persecution complex. Certainly, some of this persecution is real (in a first-world kind of way), nonetheless, movies like GND2 tend to lack credibility with those not in the fold.

I find myself conflicted about GND2. I don’t need to be convinced that God is real (neither should any “believer”), so what’s the purpose of a movie like this? Are we trying to prove something that requires faith?

Are we trying to motivate ourselves to stand up for Jesus? Amen. But then we should pause and ask ourselves…how did Jesus stand up for Himself?

So I write this because I’m asking, are we willing to take an honest look at what impression we’re giving when these kinds of films are released to the general public? (Outside the church audience.) I think we’re giving the wrong message.

What we can learn about ourselves from atheists

I recently stumbled upon a review of GND2 by atheist blogger, Neil Carter (Godless in Dixie), in his post titled, “Persecute Me, Please: God’s Not Dead 2 and the Evangelical Lust for Victimhood.” Strangely, I found myself agreeing with him on several points.

Yes, he’s an atheist (former Christian) but sometimes we can learn a lot about us from those who don’t believe. Are we brave enough to listen and learn?

Carter starts the article this way…

What does a faith community founded upon martyrdom do when they aren’t actually being martyred in any way? They fabricate their own martyrdom, that’s what they do. They invent their own persecution, either out of thin air or else out of their daily newsfeeds, taking each story and twisting it to reinforce their expected narrative.

There’s some truth to what he’s saying. While there’s no doubt that some Christian freedoms are being challenged in the public arena in America, a lot of this conflict is our own doing. Some of this comes from what I would call our  combative “us vs. them” evangelical paradigm. In other words, Christians in America aren’t generally known for what they’re for but what they’re against.

Yes, Jesus was combative, but who with? It wasn’t with sinners.

So, instead of being listened to with some credibility, we get blasted and lampooned for what looks to them like moral engineering and trying to force America backward into the “traditional values” of the 1950’s.

For instance, SNL gave this parody of GND2 recently (don’t watch if you’re easily offended). We may not like the irreverent message, but rather than point to it as proof that the world is going to hell in a handbasket, shouldn’t we be looking at what’s behind their derision? What are they trying to tell us?

Are we actually doing what Jesus would do?

Consider this: sinners LOVED Jesus. Yes, even the most despicable of them. Why? Because they could tell that He loved them. So they thronged to listen to His stories about His Father and the Kingdom, to be touched and healed and given hope. He ate and drank with them in their homes, without any rebuke. Sinners didn’t like the Pharisees (who also thought they were standing up for God) because they hypocritically rubbed their noses in their sin.

Who are we more like? What does that say about us?

According to Carter in the same article, this is what we Christians don’t get…

It never seems to dawn on them that there could be other reasons why they are ever disliked. Lately, in America at least, they have come to define their own spirituality in terms of how vehemently they work to curtail the rights of others who are not like them. It is to this, they believe, that they have been called.

Finally, he makes this assessment…

And yet they are still not satisfied. They want more. They want things to be the way they used to be, back when they could say and do virtually anything they wanted to without worrying that it disadvantages other people who believe differently from them.

I also dislike this version of “Christianity.” Not because I want America to slide hopelessly into decadent debauchery (I don’t think atheists want that either), but because I know that sinful behavior is a symptom. And as long as we’re known for our fearmongering and defending our traditional American Christian values, instead of the actual gospel of the Kingdom that transforms the human soul, we won’t get the same results as Jesus.

Carter also wrote a post about the first movie titled, “What I learned about Atheists from God’s Not Dead,” which proves a point I made in my “Are sinners separated?” series (objection #6), about how our traditional view actually insults unbelievers rather than gets them to listen to us.

Why we need a new reformation

Perusing Carter’s blog posts, I find that he makes many brilliant and even devastating arguments against what we evangelicals seem to hold dear. Interestingly, some are similar to what fuels my own faithful iconoclasm. While I disagree with his conclusion about the God of the Bible, we both agree that popular evangelicalism, as it’s practiced in America, is broken at a systemic level. The sooner we realize this the better, actually.

If we honestly want to have a meaningful conversation with thinking people in the world, we need to listen to their criticisms as objectively as possible, and without condemning ourselves. This is how we learn and grow.

God is love, and Jesus’ church is a living embodiment of Love. And like all living things, we must let ourselves be pruned. Pruned back to love, that is (John 15:1-11).  This means letting go of the “dead branches” of religious cultural baggage that no longer resonates with the world we live in. This is the impetus of all reformation. And we are in dire need of re-forming today!

God's favorite (and so are you), a son and a father, happily married to the same beautiful woman for 39 years. We have three incredible adult children. My passion is pursuing the Father's heart in Christ and giving it away to others. My favorite pastime is being iconoclastic and trailblazing the depths of God's grace. I'm also senior pastor of Cornerstone Church in Wisconsin.
View all posts by Mel Wild →
This entry was posted in Grace, Love, Reformation and tagged Atheism, Christian apologetics, Christianity, Evangelicalism, Evangelism, God's Not Dead 2, Good News. Bookmark the permalink.