The Potter’s cooperative process with the clay 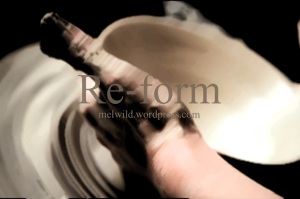 God works with us much like a potter does with clay. But do we understand what that actually means? If you have a deterministic view of God, you will see it as proof that God meticulously controls, molds, and shapes us, without little, if any, input on our part. I believe Scripture tells us something quite different.

What’s curious to me is that many believers seem have an almost fatalistic view of God, some even believe that He creates people to do evil. One of the proof-texts they usually cite is Romans 9:19-21:

19 You will say to me then, “Why does He still find fault? For who has resisted His will?” 20 But indeed, O man, who are you to reply against God? Will the thing formed say to him who formed it, “Why have you made me like this?” 21 Does not the potter have power over the clay, from the same lump to make one vessel for honor and another for dishonor? (NKJV)

Case closed, right? Not so fast. We have to be careful about how we understand the wording and context here and find out how Paul is using this analogy.

This is the situation that Paul is referring to in Romans 9. He’s not making a case that God arbitrarily choses one vessel for honor and another for dishonor. He’s saying, how we respond to God determines the outcome of the “vessel.”

Notice how Jeremiah prophetically uses this analogy with regard to Israel (bold type added):

The question we should be asking is, why was the “marred” clay repurposed? Fortunately, Jeremiah tells us:

So, Paul is not making a case that God predetermined who would be objects of His wrath and who would be vessels of honor. It was the object’s response to God’s “shaping” that determined the outcome of the vessel. And that God is justified in doing this, just as a potter is with clay that won’t be shaped in his or her hands (vs.5-6).

Israel was set aside (temporarily), not because of God’s predetermined will, but “Because they have forsaken Me and made this an alien place…” (Jer.19:4)

God is the One who creates and shapes. We cannot make ourselves into anything. But He also works with us, fashioning us according to how we permit Him to do so.

Why does He work this way? Because God is love, and because love is His highest value, He honors the crown of His creation by giving us free will.

C.S. Lewis said it this way:

Why then did God give them free will? Because free will, even though it makes evil possible, is also the only thing that makes any love or goodness or joy worth having…the happiness which God designs for His higher creatures is the happiness of being freely, voluntarily united to Him and to each other in an ecstasy of love and delight compared with which the most rapturous love between a man and a woman on this earth is mere milk and water.  (C.S. Lewis, “The Case for Christianity”)

What kind of love would it be if God gave you no choice but to love Him? Would you ever call that love? It would be no better than finding a wife by capturing her and drugging her into submission.

And how evil it would be if God was someone who arbitrarily goes through a line of people and picks one and rejects another. Would you call it love if God picked you but didn’t pick your children? Is your love for your children greater than God’s?

As a father, I love my children dearly. I love each one uniquely and unconditionally. I would do anything for them. As their parent, you could say my “pre-ordained will” for them is to be healthy and whole, living life in intimate and loving relationships, full of joy and purpose, fulfilling their deepest desires. But I can’t make their life choices for them. And I must let them determine the depth of their side of our relationship.

God is a good Father; He’s not a meticulous control freak. In His sovereignty, He freely chose to limit Himself for us, giving us every opportunity to reciprocate His unconditional love (I wrote several posts on this.) God’s perfect will is that we all fully cooperate with His predestined purpose for us as His adopted sons and daughters, so that we can receive our full inheritance (Eph.1:3-23). His heart is that every human being who ever lived would be re-formed and enjoy life in His embrace forever (2 Pet.3:9).

Beloved, know that His intent is to make you into something beautiful!

God does know “the end from the beginning,” but He didn’t create you fatalistically, or to be His automaton. And He will turn everything you choose to do, and even everything others do to you, for your good…if you will but enter into this love relationship (Rom.8:28; 1 John 4:19).

This is why God gets the glory either way. Whether we respond or not, God is faithful and good in all that He does.

As Paul said in Romans 9:20, who can blame Him for shaping us this way?

God doesn’t consider our pedigree, ethnicity, or any other outward thing that man looks at; He looks at our heart (1 Sam.16:7). His Spirit is ever working in us. Hear Him saying, “Today, if you hear My voice, do not harden your heart” (Heb.3:15). Don’t become hardened and unpliable, as Israel did in their rebellion, where they would not let Me shape them the way I intended.

Of course, this would be a meaningless admonition if the hardness of our heart (clay) was predetermined by God.

Discipleship is a cooperative process. God is the potter and you are the clay. Only God can make you His vessel, but the quality of the vessel is up to you.

God's favorite (and so are you), a son and a father, happily married to the same beautiful woman for 41 years. We have three incredible adult children. My passion is pursuing the Father's heart in Christ and giving it away to others. My favorite pastime is being iconoclastic and trailblazing the depths of God's grace. I'm also senior pastor of Cornerstone Church in Wisconsin.
View all posts by Mel Wild →
This entry was posted in Father Heart of God, Love, Reformation and tagged Christianity, derterminism, Discipleship, God's sovereignty, Predestination, transformation. Bookmark the permalink.