If God cannot look at iniquity, and Jesus is the friend of sinnners, what does that do to the Trinity? We will look at this question, and two other objections I’ve raised in this series, to help us faithfully question the idea that sinners are separated from God.

Again, if you’re just joining us, please read the previous parts to this series before continuing here. We will look at objections 4, 5, and 6 in this installment.

Objection four: It makes the Triune Godhead conflicted. If God is too holy to look at sin, and Jesus is the “friend of sinners,” what does that do to the Trinity? 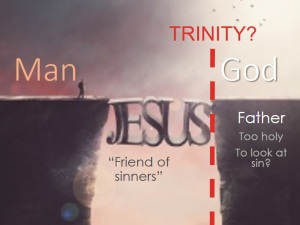 Looking at my diagram, we can see that we’ve created a wall (red dashed line) between God, who is too holy to look at sin, and Jesus, God the Son, hanging out with sinners. That’s a conflicted Trinity!

You are of purer eyes than to behold evil, and cannot look on wickedness… (Hab.1:13a NKJV)

But if one bothers to read the whole verse, we find that Habakkuk is actually making the opposite point…lamenting that God actually does look at evil (emphasis added):

…Why do You look on those who deal treacherously,
And hold Your tongue when the wicked devours
A person more righteous than he? (Hab.1:13b NKJV)

In fact, he makes this same point earlier in verse 3. Here’s two other translations that clearly bring this out…

“Why do you make me see wrongdoing?
And why do you watch wickedness?” (Hab.1:3 GWT)

“Why do you make me see such trouble?
How can you stand to look on such wrongdoing?” (Hab.1:3 GNT)

Furthermore, we see Jesus supping with the worst sinners all the time! In fact, He is derisively called, “Friend of sinners,” a winebibber who receives sinners and eats with them.” (Matt.11:19; Luke 15:1-2). Keep in mind that it was a sign of acceptance in the Middle Eastern culture of Jesus’ day if someone ate in a person’s home.

Finally, we do know that Scripture reveals that Jesus was the “exact representation” of  God (Heb.1:3). Jesus Himself said, “If you’ve seen Me, you’ve seen the Father.” (John 14:7, 9) There is no conflict here! Whatever is not like Jesus is not like the Father either.

19 that God was reconciling the world to himself in Christ, not counting people’s sins against them. And he has committed to us the message of reconciliation. (2 Cor.5:19 NIV)

The point of the Cross is that God has already taken your sins away. The New Covenant is not a question of our behavior (good or bad); it’s a question of having faith in Christ’s behavior! Do you believe what Christ has done for you or not?

My second point here is that when it becomes about being sin-conscious instead of faith or God-conscious, it makes us judgmental…always pointing our self-righteous finger at other’s shortcomings. Since we think sin is still separating sinners from God, we are counting their sins against them, too!

Objection six: It insults unbelievers by telling them they can’t do anything good or know God. The irony is, we actually shut people off to the gospel by insulting their intelligence and natural understanding of goodness, love, and ability to know God.

There are two biblically-based points that easily contradict this faulty notion.

“Every good thing” includes the other-centered, God-breathed love a mom has for her child, or the love and compassion that even the worst sinner can show toward another human being. To say that this is not good is not only insulting to the mother or anyone else who is reflecting God’s goodness, it dishonors God because it comes from Him.

Experience and common sense tell us that sinners can and do demonstrate His goodness, regardless of how misguided they may be toward God.

Furthermore, Paul tells us this (emphasis mine):

“for when Gentiles, who do not have the law, by nature do the things in the law, these, although not having the law, are a law to themselves, 15 who show the work of the law written in their hearts, their conscience also bearing witness, and between themselves their thoughts accusing or else excusing them) 16 in the day when God will judge the secrets of men by Jesus Christ, according to my gospel. (Rom.2:14-16 NKJV).

For Paul seemed to think that, by nature, everyone knows God, even though they may deny Him:

19 because what may be known of God is manifest in them, for God has shown it to them. 20 For since the creation of the world His invisible attributes are clearly seen, being understood by the things that are made, even His eternal power and Godhead, so that they are without excuse, 21 because, although they knew God, they did not glorify Him as God, nor were thankful, but became futile in their thoughts, and their foolish hearts were darkened. (Rom.1:19-21 NKJV)

Notice here that what may be known of God is manifest in them. There’s that word, “in” again! God is revealing Himself IN even the most rebellious sinner. I’ve already covered Acts 17, in part two, where Paul appealed to the pagan Athenians’ knowledge of God.

Contrary to our traditional idea of evangelism, Paul didn’t make the appeal that man was totally depraved; he actually made the opposite appeal…that they did and should embrace the God they already knew!

So, let’s stop insulting people by telling them they have no way of knowing God, or doing anything good, unless they become a Christian. That actually hinders them from being open to the good news. Instead, let’s be like Paul, who appealed to every one’s conscience (emphasis mine):

2 But we have renounced the hidden things of shame, not walking in craftiness nor handling the word of God deceitfully, but by manifestation of the truth commending ourselves to every man’s conscience in the sight of God.  (2 Cor.4:2 NKJV)

Okay, now that we’ve laid the foundation for what “separation from God” is not, we are ready to look at Isaiah 59:2 and see how man is “separated.” Next time!

God's favorite (and so are you), a son and a father, happily married to the same beautiful woman for 41 years. We have three incredible adult children. My passion is pursuing the Father's heart in Christ and giving it away to others. My favorite pastime is being iconoclastic and trailblazing the depths of God's grace. I'm also senior pastor of Cornerstone Church in Wisconsin.
View all posts by Mel Wild →
This entry was posted in Doctrine, Faith, Father Heart of God, Reformation and tagged Are Sinners Separated from God?, Christianity, Evangelism, Four Spiritual Laws, myth of separation, New Covenant. Bookmark the permalink.

1 Response to Are sinners separated from God? Part four