Why we should practice the art of faithfully questioning everything

One thing I ‘ve found fascinating from studying human nature, teaching, writing and having conversations with people, is our innate ability to disregard anything that is different than what we already agree with. This amazing mental disconnect is especially prevalent with true believers, whether Christian or otherwise.

Whenever our illusionary world of certainty is put into question, we will run to the safety of those we agree with. We will pore over our favorite Bible passages and commentaries, read blogs and books we agree with, watch videos…all to reassure ourselves once again of our certainty.

Please understand that when I say “illusionary world of certainty,” I’m not saying that there is nothing to be certain about, or that there isn’t objective truth. I’m saying that our understanding of objective truth is often subjective. To imagine that we’ve got all our doctrines pristinely perfect is the very height of elitist arrogance…or just a plain mulish unwillingness to let anyone get through to us.

I find this phenomenon especially interesting in blogging. For instance, I know that whenever I write on something non-controversial, or what most Christians already agree with, I will get lots of “likes” and comments…mostly, people saying how they already agree with what I said. And this is encouraging and reaffirming to me.  But whenever I write something that’s not reiterating the popular “evangelical” fare (which is a lot of my writing), not as many “likes” and comments. (This is why we should get our need for affirmation primarily from our heavenly Father, not from popular agreement.)

Of course, I don’t want you to “like” something I said if you don’t actually like it. But we should all be asking ourselves in this situation, “Why don’t I like it?” And more importantly, should this affect my relationship with this person?

We don’t seem to know how to have relationships with people we may have some disagreement with, so we leave the relationship. We leave marriages, friendships, churches, or any other group we don’t agree with. Strangely, we find more comfort from dismissing or demonizing these opposing views than learning from them.

There is also a dangerous side to this mental disconnect, especially with something so passionately held as religion. As Blaise Pascal once said, “Men never do evil so completely and cheerfully as when they do it from religious conviction.”

Dr. Daniel J. Seigel (Mindsight Institute) shares how concentration camp guards during World War II could kill or brutally torture their prisoners in inhuman and horrific ways, yet they were very kind to their dogs. Studies in neurobiology have shown that if we encounter someone NOT like us (religion, race, politics, social standing…), that we can actually shut off the impulses in our brain that provide compassion and empathy, allowing one to compartmentalize these people, who probably have families and hopes and dreams and dogs just like we do, into this rationalized hell of being treated as “less human” or unworthy of love. This myopic perception is what Einstein called, “An optical delusion of our separateness.” 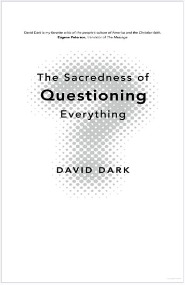 David Dark, in his book, The Sacredness of Questioning Everything, sums up this danger quite well.

Of course, when religion won’t tolerate questions, objections, or differences of opinion and all it can do is threaten excommunication, violence, and hellfire, it has an unfortunate habit of producing some of the most hateful people to ever walk the earth. (p. 34)

In my own book, Sonshift, I make the point that we should always be growing and changing. This doesn’t sit well with many “Bible-believing” folk. It’s often likened to raising doubts about the validity of the Bible—or worse, falling into an apostate condition. The honest truth is, we all just don’t like change, but change is the only way we will grow—especially when it comes to growing in the faith.

Isn’t being humble and teachable, by definition, being open to changing what we’ve previously held with at least some conviction? Actually, the very word we translate into English as “repent” (metanoeo) means to “undergo a change in frame of mind….”

I seriously think that to stay stuck in what we’ve been taught leads to spiritual arrested development. It’s actually not healthy at all. This come from what Derek Flood (Disarming Scripture) calls “unquestioning obedience” to what we think Scripture is saying, instead of the way of Jesus’ “faithful questioning.” Jesus certainly confronted the fundamentalism of His day—not to tear down biblical truth, but to make it good and whole.

As David Dark asks, if there is no soul-searching, is the soul even there?

While it seems counterintuitive, we understand that living things must be pruned back for them to keep growing and bear more fruit (See John 15:2). Likewise, before there can be a re-formation, there must be a “cutting back” of our current formation. It’s only by being courageous enough to question our current knowing that we move into better knowing.

Yes, it’s risky…but so is being alive.

If we aren’t reaching toward a fresh understanding of the world through the questions we ask, we remain pretty well zombified in the cold comfort of dead religiosity. (p. 42)

I would further make the case that stubbornly clinging to what we’ve always believed without considering a different view is a hallmark trait of “Zombie Christianity.” This is the fruit of fear-based religion rather than a love-based relationship with our heavenly Father as fully affirmed sons and daughters who aren’t afraid of truth, even if it’s not our truth.

Being afraid to think for ourselves because of what might be the consequences of going against the grain of popular “Bible-speak” is Orwellian in nature and not a healthy way to live at all, as Dark said earlier in his book…

Having faith in this brand of God is akin to Orwell’s “doublethink”—a disturbing mind trick by which we don’t let ourselves know what’s really going on for fear of what might follow. (p. 12)

I could make a strong argument that neither Jesus nor Paul would be received very well in our current evangelical world of doctrinal certainty because of this Christianized “doublethink.” We don’t realize just how subversive they were in their teaching, constantly overturning the tables of the “solid teaching” of their day.

For instance, we see the contrast in Acts 17 between the unquestioning obedience of the Jewish leaders in Thessalonica (vs.1-9), who wanted to kill Paul, and the sacred questioning of the Bereans who received Paul’s strange teaching…

These were more fair-minded than those in Thessalonica, in that they received the word with all readiness, and searched the Scriptures daily to find out whether these things were so. (Acts 17:11 NKJV)

Asking faithful questions is a sign of a healthy soul, even when we think they might be dumb questions. As an old saying goes, “A wise man can learn more from foolish questions than a fool can learn from a wise answer.”

All reformations in Christian history came from faithful questioning of the status quo. If we do not continue on this trajectory, we will not continue to “grow up into in all things into Him who is the Head—Christ.” (See Eph.4:13-15). I don’t think we’re there yet, do you? For it’s in the tension between what we’re sure about and what we’re afraid to question where God brilliantly brings us into greater biblical self-discovery, which is where we become more spiritually, emotionally, and relationally healthy and whole as believers.

I am certain of one thing: our faithful and humble heart of uncertainty will lead us together into the very heart of Jesus—who is our way, our truth and our life in the Father’s embrace. Amen.

God's favorite (and so are you), a son and a father, happily married to the same beautiful woman for 40 years. We have three incredible adult children. My passion is pursuing the Father's heart in Christ and giving it away to others. My favorite pastime is being iconoclastic and trailblazing the depths of God's grace. I'm also senior pastor of Cornerstone Church in Wisconsin.
View all posts by Mel Wild →
This entry was posted in Faith, Reformation, Sonship, Uncategorized and tagged Christianity, Culture, Relationships, Spiritual growth, transformation, Truth. Bookmark the permalink.