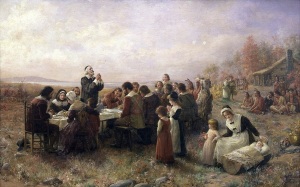 Would you still be thankful for God’s goodness if it seemed as though He had let your spouse and children be taken by disease in a land you had just dedicated “for the glory of God,” and after having pledged to serve Him faithfully in this endeavor?

Or would you question His faithfulness, even becoming angry and bitter? After all, you did your part, yet He didn’t seem to come through on His end at all.

The reason I use this scenario is because this is exactly what happened to the Pilgrims and, remarkably, the very set of circumstances that led up to the first thanksgiving celebration in America.

Here’s an account of the aftermath of the harsh and cruel winter that greeted the Pilgrims, who we would probably view as an odd religious sect today, almost immediately upon arriving at what would become the Plymouth Colony on December 21, 1620…

Of the original 102 Mayflower passengers, four died before reaching Plymouth. By the summer of 1621 there were another 46 deaths among the passengers, and about 25 deaths among the crew. After the General Sickness, only 12 of 26 men with families and 4 of the 12 single men and boys survived. “All but a few” of the women survived.

Quoting numbers doesn’t do this justice so let’s put it in perspective.

What this account is basically telling us is that most of the families that came here for “the advancement of the Christian faith and honor of our King and Country” were absolutely devastated: husbands, wives, mothers, fathers, children…all lost. In fact, had it not been for the captain of the Mayflower staying until April 1621, none of them would’ve survived, for the Mayflower itself became their only real shelter.

Furthermore, imagine not only losing your own family, but also half of all the people in your “world”…your community…those you counted on…those who you were going to share the rest of your life with…maybe some of them were close friends and relatives….

Yet, amazingly, none of them chose to return to England with the Mayflower, in spite of their nightmarish experience and horrendous loss.

Then something even more amazing happened. In the fall of 1621, when first harvest was finally in, John Carver, the first governor of Plymouth Colony and author of the Mayflower Compact, called for a special celebration of thanksgiving to God!

No bitterness…no anger at God for abandoning them in their hour of greatest need…no running back to their old life…just thankfulness.

We have traditionally looked back at this “first Thanksgiving” and romanticized it with our stories and paintings (like the one above), and remember it every year with all our wonderful traditions. But have we ever considered the unimaginable cost that led these humble Pilgrims to give thanks in the first place?

This makes me wonder what the Pilgrims would’ve thought about all of our “first world” problems that seem to so easily beset us today. It’s so easy to become unthankful when it’s all about us in our comfy “selfie” world.

I also wonder if the God-given freedoms we so cherish in this nation were not, at least in part, birthed from the very womb of the thankfulness to God offered by this small band of worshipers in the face of such extreme suffering.

I do realize that there may be some reading this who have suffered terrible loss of loved ones. It is truly tragic and very painful and should not be minimized. If this is the situation you find yourself in, I want to encourage you. And this is my point…

The Bible tells us, over and over, to be thankful. That, we all understand. But do we also understand that thankfulness has nothing whatsoever to do with our circumstances and has everything to do with walking in the light as God is in the light?

Being thankful in dire situations and horrific circumstances is the supreme act of faith because the person giving it is truly doing so in spite of everything he or she sees or feels to the contrary (2 Cor.5:7). You can know with certainty that this kind of faith is precious to God and He does not ignore such sacrifice and utter trust (Heb.11:6).

Also know that this declaration of faith in the face of difficulty gives us supernatural strength to persevere and even thrive in the worst possible situations. I like how the Message Bible says it in Habakkuk (bold type added):

Though the cherry trees don’t blossom
and the strawberries don’t ripen,
Though the apples are worm-eaten
and the wheat fields stunted,
Though the sheep pens are sheepless
and the cattle barns empty,
I’m singing joyful praise to God.
I’m turning cartwheels of joy to my Savior God.
Counting on God’s Rule to prevail,
I take heart and gain strength.
I run like a deer.
I feel like I’m king of the mountain! (Hab.3:17-19 MSG)

Conversely, being unthankful is a sign of unbelief. It reveals a narcissistic self-centeredness that only leads one into darkness and bondage. For instance, here’s what Paul tells us about the unthankful (bold type added):

For men will be lovers of themselves, lovers of money, boasters, proud, blasphemers, disobedient to parents, unthankful, unholy (2 Tim.3:2)

because, although they knew God, they did not glorify Him as God, nor were thankful, but became futile in their thoughts, and their foolish hearts were darkened. (Rom.1:21 NKJV)

I will end with two points to consider about thanksgiving.

First, that the Pilgrims had no special holiday in November called “Thanksgiving.” That was invented by us later. What they did have was a daily lifestyle of thanksgiving to God.

And that should be instructive to us.

Second, circumstances don’t make us free, Jesus makes us free. And, in Him, we always overcome every difficulty this life has to offer…we are undefeatable (John 16:33; 2 Cor.2:14)…whether our circumstances change or not.

And that should make us thankful always.

So, to all my American friends, and to everyone around the world, let Paul’s words resonate in your hearts and resound with thanksgiving. And may you and yours be filled with God’s supernatural peace and joy!

Be anxious for nothing, but in everything by prayer and supplication, with thanksgiving, let your requests be made known to God;  and the peace of God, which surpasses all understanding, will guard your hearts and minds through Christ Jesus. (Phil.4:6-7 NKJV)

God's favorite (and so are you), a son and a father, happily married to the same beautiful woman for 41 years. We have three incredible adult children. My passion is pursuing the Father's heart in Christ and giving it away to others. My favorite pastime is being iconoclastic and trailblazing the depths of God's grace. I'm also senior pastor of Cornerstone Church in Wisconsin.
View all posts by Mel Wild →
This entry was posted in Faith, Freedom and tagged American History, Christianity, Peace of God, Pilgrims, Thanksgiving. Bookmark the permalink.