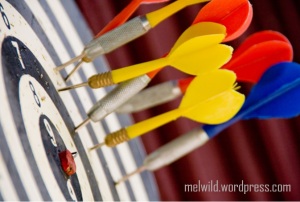 In modern Christianity, we tend to look at sin as a violation—breaking a list of God’s rules that requires punishment.

While this view is not necessarily wrong, especially under the Law, it still “misses the mark,” if you will, because it prevents us from seeing the bigger picture revealed in Scripture.

This post is a continuation of my thoughts in “Thoughts on Fear and Love” and “We’re not a foster child, we’re adopted!” If you haven’t done so already, it would be helpful to read those posts before reading this one.

The most common definition for sin is “to miss the mark.” This is a good start, but it still doesn’t answer the most important question…miss what mark?

What is the mark?

It is my contention that when we look at sin as a violation, we’re only understanding the result of sin and not what mark is actually being missed.

The Greek word for “sin” is ἁμαρτία (hamartia).

According to the Online Etymology Dictionary, it means “tragic flaw…to fail of one’s purpose; to err, sin,” originally “to miss the mark.”

In Greek tragedy, hamartia is commonly understood to refer to the protagonist’s error or flaw that leads to a chain of plot actions culminating in a reversal from their good fortune to bad. (Wikipedia)

Thayer’s Bible Dictionary concurs: to be without a share in; to miss the mark; to err, be mistaken; to miss or wander from the path of uprightness and honour, to do or go wrong….

These definitions make the picture a little clearer for us. Sin is a “tragic flaw” that causes us to “wander from the path…” But then, we must ask, what flaw and what path of uprightness and honour?

The Mirror Bible can shed some light on this in its rendering of Romans 3:23 (bold type added; Mirror commentary in parentheses):

Everyone is in the same boat; their distorted behavior is proof of a lost blueprint. (The word sin, is hamartia, from ha, negative and meros, form, thus to be without form or identity; hustereo, to fall short, to be inferior, doxa, glory, blueprint, from dokeo, opinion, intent.)

From these definitions, we can begin to construct a better picture of sin.

Sin is simply the result of a “lost blueprint”…which causes “wandering from the path” that God has designed for us—it’s missing God’s original intent for us.

And when we wander from His path for us the results are often disastrous: a toxic life full of defeat, bondage, fear, confusion, brokenness, boredom, regret, disappointment, addiction, and lots of other garbage piled up in our life that God never intended us to have…not to mention, the relational wreckage left in our wake.

In other words, we’ve missed the mark…which is the life God meant for us to live, full of glory and wonder.

Scripture also reveals that Jesus came to give us His life of fullness and abundance, but Satan’s mission is to keep it hidden—to steal it from us and destroy everything that’s good about our life (See John 10:10).

Furthermore, the New Testament writers saw sin as a disease that Jesus came to cure. For instance, they make note that Jesus often forgave people their sins when He healed them. And Matthew interpreted Isaiah 53 this way (bold type added):

When evening had come, they brought to Him many who were demon-possessed. And He cast out the spirits with a word, and healed all who were sick,  that it might be fulfilled which was spoken by Isaiah the prophet, saying:
“He Himself took our infirmities
And bore our sicknesses.” (Matt.8:16-17 NKJV; cf. Isa.53:4)

But when we interpret sin as a “violation of rules” that require punishment we miss the heart of the Father for us. We’re preoccupied with treating the symptoms rather than curing the disease.

The Father didn’t send Jesus to help us escape punishment for breaking the rules; He came to heal us! I’ve talked about this paradigm shift in “Cross paradigm.”

Jesus came to shed His light on what was lurking in the darkest part of our souls, which are the distortions and lies we believe about ourselves, about God, and what blinds us to our purpose.

Jesus came to give sight to the blind—to give our life meaning again.

Paul spent a lot of time teaching the Ephesian church what this “mark” is, which is all about our identity.  Notice how he describes it at the beginning of his letter:

just as He chose us in Him before the foundation of the world, that we should be holy and without blame before Him in love, having predestined us to adoption as sons by Jesus Christ to Himself, according to the good pleasure of His will (Eph.1:4-5 NKJV)

Then, he prayed that our eyes would be opened and “flooded with light” so that we would grasp what this adoption means to us:

I pray that your hearts will be flooded with light so that you can understand the confident hope he has given to those he called—his holy people who are his rich and glorious inheritance. (Eph.1:18 NLT)

This is precisely what the New Testament writers and early church fathers contended for…this revelation of our purpose…”In Your light, we see light.” (Psalm 36:9).

As I mentioned in my last post, we either operate out of fear or love. When our paradigm is switched to fear, our eyes are still blinded; we’re still eating from the wrong Tree—the dualistic world of “good and evil” inherited from Adam’s fall. This is the Tree from which all religions of men are based—one of separation, violations, and fear of punishment.

But as John points out, this fear-based paradigm, including its theology, only reveals that we still have not been “made perfect in love” (1 John 4:18), for when we encounter the Father’s love, Love floods our hearts and we’re transformed from this matrix of fear to that of love. This is the thesis of my book, Sonshift—the Father’s embrace changes everything!

Paul describes this “mark” in his other letters. Notice how he describes his journey toward wholeness and purpose (bold type added; all are NKJV):

Not that I have already attained, or am already perfected; but I press on, that I may lay hold of that for which Christ Jesus has also laid hold of me. Brethren, I do not count myself to have apprehended; but one thing I do, forgetting those things which are behind and reaching forward to those things which are ahead, I press toward the goal for the prize of the upward call of God in Christ Jesus. (Phil.3:12-14)

Next, notice the language Paul uses to describe the successful end of his journey…

I have fought the good fight, I have finished the race, I have kept the faith. (2 Tim.4:7)

In other words, Paul contended against the orphan-based fear that would keep him from successfully running the race. The race is for us to win, to hit the mark—the predestined purpose of God—the “upward call of God IN Christ Jesus.”

And missing this is what “missing the mark” is all about.

The bottom line on sin is this: sin is the tragic loss of meaning and purpose that results from eating from the wrong tree. The dualistic Tree of Good and Evil based in fear—fear of separation, abandonment and punishment—the counterfeit construct of the”god of this age,”  who uses it to blind us to the truth (2 Cor.4:4).  As Morpheus said in the first Matrix movie, “it’s the world that’s been pulled over our eyes.” It keeps our hearts from looking to the “that for which,” the “fullness that fills God”—the Tree of Life, our life in Christ.

So let’s stop missing the mark, which is the whole point of our life. And let’s stop looking at the symptoms and treat the disease. God has great plans for us all! Amen.

God's favorite (and so are you), a son and a father, happily married to the same beautiful woman for 41 years. We have three incredible adult children. My passion is pursuing the Father's heart in Christ and giving it away to others. My favorite pastime is being iconoclastic and trailblazing the depths of God's grace. I'm also senior pastor of Cornerstone Church in Wisconsin.
View all posts by Mel Wild →
This entry was posted in Freedom, Identity and tagged Christianity, fear and love, Paradigm shift, Sin, Sin as a disease, sonship, transformation. Bookmark the permalink.

12 Responses to Missing the mark