The Word of God and the God of the Word 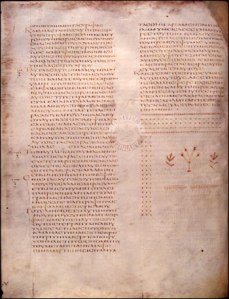 John Crowder had Steve McVey on his “Jesus Trip” video podcast recently, and had what I thought was a very balanced discussion on the inspiration of Scripture. I’ve included the video here.

Having dug deeply into these things myself, I would have to say that I agree with what they said. They bring up a lot of great questions and controversy that has arisen about how we should see the Bible.

Do I believe the Bible to be inspired by God? Yes, absolutely. Can we trust it? Yes, again. But when we dig deeper the answers get a little murkier. What translation is the best? Why do they often disagree with each other? Why were some books considered canon and others not? If man decided which books are included, then wasn’t this selection man-inspired? Well, I’m not going to get into all of that here, but I will mention a couple of things before we get to the video.

Can we trust the manuscript copies that often don’t agree? For those of you who don’t know, there are no original letters from the New Testament writers in existence.  We do have about 24,000 copies—over 5,000 in Greek, the rest in other languages.  In fact, we’re finding more copies all the time. This quote is from Wikipedia:

“Every year, several New Testament manuscripts handwritten in the original Greek format are discovered. The latest substantial find was in 2008, when 47 new manuscripts were discovered in Albania; at least 17 of them unknown to Western scholars. When comparing one manuscript to another, with the exception of the smallest fragments, no two copies agree completely throughout. There has been an estimate of 400,000 variations among all these manuscripts (from the 2nd to 15th century) which is more than there are words in the New Testament.” Wikipedia

The reason for these discrepancies are usually due to scribes or monks adding words (which you sometimes have to do when translating from one language to another) or leaving out phrases. Sometimes the omissions are simply because we don’t have that manuscript page anymore (most copies are not complete).

Interestingly enough, at least one copy was found in the trash at a monastery, and this is one of the sources for our modern translations. How’s that for controversy!

Because of these things, there has been much debate over which manuscript copies our Bible translations should be based on. This gets into textual criticism which, again, is beyond the scope of this post.

The reason I’m including this video and bringing all this up is to point out that the Word of God is Jesus. The words of God are in the Bible. Our life is found in Jesus. The Bible points to Jesus.

Let me remind you of what Jesus said to the Pharisees:

You search the Scriptures, for in them you think you have eternal life; and these are they which testify of Me. (John 5:39 NKJV)

Furthermore, John declared Jesus to be the Word of God.

Am I saying we can’t trust the Bible? We don’t need the Bible because we have Jesus? Absolutely not! The Bible is supernaturally inspired (not dictated), we find Jesus there, and He is eternal life. I LOVE the Bible, and without it we have no hope of renewing our minds, transforming us from believing in Jesus to believing like Jesus.

I’m saying what John Crowder and Steve McVey are saying on the video. We have to be careful we don’t fall into the ditch of two extremes. One being “bibliolatry” (worship the Bible), practically elevating the Bible to the fourth member of the Trinity, the other extreme, as Steve McVey points out on the video, one that “marginalizes the Bible at best, and dismisses it at worst, so as to suggest that we don’t even need the Bible.”

Beloved, we NEED the Bible! All Scripture is inspired and profitable to us (2 Tim.3:16). But remember it should also lead us into encounters with the Living God, into a love relationship of intimacy and trust with the Lover of our Soul, Jesus. Otherwise, we’re no better off than the Pharisees.

I would love to hear your thoughts on this. How do you see the Bible’s place in your personal journey with God?

God's favorite (and so are you), a son and a father, happily married to the same beautiful woman for 39 years. We have three incredible adult children. My passion is pursuing the Father's heart in Christ and giving it away to others. My favorite pastime is being iconoclastic and trailblazing the depths of God's grace. I'm also senior pastor of Cornerstone Church in Wisconsin.
View all posts by Mel Wild →
This entry was posted in Faith, Theology and tagged Bible, Christianity, Inspiration of Scripture, Jesus, John Crowder, Steve McVey, Word of God. Bookmark the permalink.