Are you running toward the Law or Grace? 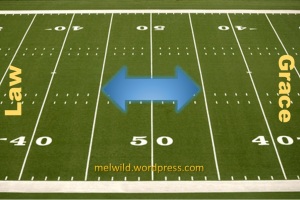 Since we’re still in the final frenzy of American Football I thought I would use that as an analogy to “tackle” the question of grace and Law. So let’s huddle up and see God’s game plan for a winning strategy.

One of the questions I get about this subject is, if we’re under grace, then what do we do with the Law? Right along with that is a similar question, are you saying the Ten Commandments are not longer relevant? In fact, this seems to be the very point of contention against those who advocate pure grace, that we are preaching law-lessness. And in some sense, we certainly are! We’re just not advocating sinful behavior.

While I understand why these questions are asked, they are not the most important ones we should be asking. We should be asking, why am I doing what I’m doing? And…what am I trusting in to manage my behavior?

I made up a football graphic (above) to illustrate why grace and Law do not go together. On one end, you see word “Grace.” On the other end, “Law.” These are the goal-lines, if you will. The arrow at the 50-yard line represents which direction you may be “taking the ball” at any given time.

“For if you are trying to make yourselves right with God
by keeping the law,
you have been cut off from Christ!
You have fallen away from God’s grace.” (Gal.5:4 NLT)

What is the lesson we need to learn here?

Living by Law or living by grace are polar opposites. To head toward one is to move away from the other.

If you try to mix the Law with grace in any fashion you will stay in the middle of the field. You will never score a touchdown, so to speak, which is the goal of the game (your freedom in Christ).

While we know that the Law will never bring us freedom, we think that some Law mixed with grace will. So we keep the moral Law–the Ten Commandments. This, again, keeps us in the middle of the field…going nowhere.

The only way to score a Grace touchdown is to run all the way down to the opposite end of the field from the Law (and I don’t mean become sinful).

I will look at the arguments you’re probably having with me in your head right now in my next post. For now, let me say what I’ve said a few times in the past.

The rebellious orphan will abuse pure grace and use it as their proof-text to live a self-indulgent lifestyle.

So the answer is not throw off grace and mix in some Law! No, both the rebellious and religious response reveal an orphan mindset and not the heart of sonship which is the foundation of our life in Christ.

I have personally worked with people who initially felt some freedom by hearing the message of pure grace, but they never let God deal with their orphan heart so it didn’t work for them. They took this to mean that they needed the structure of the Law to manage them, only to be put into a new prison–a religious one.

There’s one more critical problem with mixing Law and grace. You will either learn to trust in following the Law to modify your behavior or learn to trust the Spirit, but you can’t learn both. To learn to be guided by the Law takes you farther away from learning how to trust the Holy Spirit to guide you. In other words, you will either learn to be managed by outward restraint, by the do’s and don’t’s, or you will learn to be transformed from the inside-out by walking in the Spirit. Again, going toward one is moving away from the other.

Understand that the Law was given under the Old Covenant as God’s means to fence in His people who were still eating from the Tree of the Knowledge of Good and Evil, which is the way of the flesh. This is because they didn’t have the resident Holy Spirit to guide them yet. The Law was never meant to lead them into righteousness. It was meant to be their guardian until Christ could become us so we could live in Him (Gal.3:24-25).

Grace is how we eat from the Tree of Life (Jesus), which is the way of the Spirit who manages us from the inside-out.

The point is, you can’t make yourself righteous by eating from the wrong Tree, and you can’t eat from both Trees. You will either follow the Spirit or the flesh, but not both. To use my illustration, they are opposite ends of the football field.

We will look at this more in depth next time.

God's favorite (and so are you), a son and a father, happily married to the same beautiful woman for 40 years. We have three incredible adult children. My passion is pursuing the Father's heart in Christ and giving it away to others. My favorite pastime is being iconoclastic and trailblazing the depths of God's grace. I'm also senior pastor of Cornerstone Church in Wisconsin.
View all posts by Mel Wild →
This entry was posted in Grace, Sonship and tagged Cheap grace, Christianity, Holy Spirit, hyper grace, Jesus, sloppy Agape, transformation, Walking in the Spirit. Bookmark the permalink.

14 Responses to Are you running toward the Law or Grace?