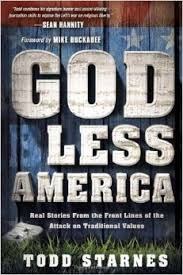 I saw this on the cover on a recent Charisma Magazine and, honestly, I groaned in my spirit. And I groan because I used to think like just like this. I’ve since found it to be a major distraction and actually counterproductive to advancing the Kingdom of God in this country…or any other country.

I’m all for defending religious liberty (for all religions), and I have nothing against the author of this book. I probably agree with a lot of what he says, and I dearly love my country and the freedoms we enjoy.  I love our history and our basic cultural values. Amen.

But I’m honestly puzzled by the American church’s narcotic-like addiction to Fox News and its obsession with trying to make our nation “Christian” again while spending little or no energy on actually representing the Kingdom of God.

Oh, by the way…America is not the Kingdom of God–nor is our Constitution, 24-hour news channels, talk radio or political parties. It’s not liberal, conservative, left winged or right winged.

Can God bless a Godless America…what???

“Our nation stands on a precipice. Freedom hangs in the balance. We live in a postmodern and post-God nation.”

This statement is from an article that the author wrote here. Again, I’m not trying to pick on him or his article, in particular. I’m trying to point out our deeply entrenched assumptions about Christianity that we hold on to in America and how it expresses itself when challenged by culture. Assumptions that should be examined in the light of Jesus Christ, not by our traditions.

So, is this actually true? And is God in the business of blessing or judging nations?

Jesus seemed to think that the sun shines and the rain falls on the just as well as the unjust (Matt.5:45). News flash! We’re not Old Testament Israel. Welcome to the New Covenant!

And here’s another news flash. God has not left our public schools just because our children don’t parrot a canned prayer every morning before classes. To be clear, I’m not against our kids parroting canned prayers in school. I’m just saying that this has nothing to do with whether God is in our schools or not. If our children or their teachers know the Lord, God is in our schools.

I wrote about this here and here. And this is just a case in point in how mixed up our s0-called “traditional Christianity” really is.

I understand that probably many of you will not like to hear what I have to say. But we must consider the truth in it. And embracing truth over our sentimental but non-working religious traditions can be liberating. 🙂

So let’s just rip the bandage all the way off, shall we? The traditional Western (American) version of Christianity is broken. Can we just admit that it doesn’t work anymore? Oh, religious people who like to be entertained or need to feel good about themselves may still be filling our buildings, but the trend is very clear. People are leaving our “good ol’ time religion” by the droves–especially, young people. I wrote about this in more depth here.

What we should be contending for…

Jesus warned us against the “leaven of the Pharisees and the leaven of Herod” (Mark 8:15). He was talking about the insidious nature of the religious spirit and political spirit. The American church needs to be delivered from this unholy union–from her addiction to and codependency on government to save her.

We need to learn how to put our trust in Christ. And I am not talking about abdicating our Kingdom responsibilities. Quite the opposite. Our world is actually waiting for someone who looks, acts and loves like Jesus. And that’s our job, by the way (1 John 4:17).

And I’m not saying that some of us shouldn’t be involved in politics, contend for our civil liberties or any of those things. I’m saying that when we start proclaiming fear and doom and condemn a whole nation to perdition, prophesying God’s judgment, we’ve left the heart of the Father. We don’t know what spirit we are of (Luke 9:54-56). And we’re certainly not doing what Jesus told us to do.

In some ways, maybe. But the better question is, what have they actually left?

I submit that most Americans are not rejecting Christ at all.  They actually haven’t met Him yet. What they’re rejecting is our self-righteous moral construct we’ve called Christianity. And we’re not trying to deceive them; we’ve bought into this religious veneer too. But our heart knows better…and longs from something deeper.

But the truth be told, “church” as we know it, has failed to transform our culture, save our marriages, or actually make people more like Jesus. Studies pretty much have proven this. But more importantly, our culture knows it.

So just maybe the world that Jesus loves so much He died for has tuned out our slick marketing campaigns and evangelistic gimmicks. They have tried our vitriolic, politically polarizing, spiritually anemic, self-righteous finger-pointing, nationalistic version of Christianity and it was found wanting.

They have moved on. Maybe we should too. Just saying…

What are we actually afraid of?

Okay, let’s talk about our Christian liberties. Consider that most of the known world was evangelized under the most anti-Christian, repressive and brutal government in human history. Paul told us to pray for our government, even saying that God put them there and that we should honor them (Rom.13:1-6). And, by the way, he was talking about Nero, one of the most brutal, possibly insane, Caesars of the Roman Empire.

It’s interesting that the early church did not try to change the Roman Empire or make it a “Christian nation.” Yet they did expand the Kingdom from within and evangelized most of the known world in their lifetime. Just a thought…

From what I can make out, we seem to be fighting to make our country a nice place for “good Christians” to raise our kids, make lots of money and live comfy lives in the suburbs where people who don’t look, talk and believe like us won’t bother us.

So, maybe, rather than waste our energy demonizing the Obama administration, the government, those evil liberal secularists…just maybe we should look at ourselves instead.

Okay, why am I talking about this here?

So…why am I talking about this on a blog about God’s radical grace and living in the Father’s embrace? Exactly for that reason! Because I see the Father’s beloved–Jesus’ glorious bride–pouring all her energy into things that will never capture human hearts or win any arguments in our culture. I actually see these things driving people away from Christ, not endearing them to Him. So can we please wake up. It doesn’t work. And Jesus didn’t even do these things, so why do we think we should?

Beloved, I pray your eyes are opened. Let’s get on with our Father’s business. And His business is “proving His good and  acceptable and perfect will” for all mankind, which He means to prove through us. That is, through those who’ve been transformed by love, those who have had their minds renewed and brought into sync with the mind of Christ (Rom.12:2; 1 Cor.2:16) instead of the talking heads on Fox News.

Finally, Jesus said that He was sending us the same way the Father sent Him (John 20:21). So, how was that? That might be a good study to undertake. Let’s take a cue from Jesus, remove the distractions, tune out the TV and radio, tune into the Spirit and be about our Father’s business. It’s about time.

God's favorite (and so are you), a son and a father, happily married to the same beautiful woman for 40 years. We have three incredible adult children. My passion is pursuing the Father's heart in Christ and giving it away to others. My favorite pastime is being iconoclastic and trailblazing the depths of God's grace. I'm also senior pastor of Cornerstone Church in Wisconsin.
View all posts by Mel Wild →
This entry was posted in Heaven on earth and tagged American Christianity, Christianity, Culture, Kingdom of God, Politics, Religion and Spirituality, Religious right. Bookmark the permalink.