Eating from the wrong tree 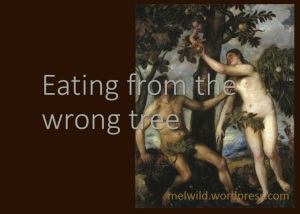 “What was Adam’s sin?” was the question that Mark Hendrickson asked us last Sunday. He was the guest speaker at our church.

Besides being an author, worship leader, songwriter, instigator of grace, and founder of Dwelling Place ministries, Mark is a fellow WordPress blogger, and he and Debbie are good friends of ours.

And Mark’s provocative question got me to thinking about this whole thing, which led me to write. So, getting back to the question, what was Adam’s sin? Was it because they ate the forbidden fruit? Technically, yes, but that’s not at the heart of the matter.

Their sin was that they were trying to be God.

And from this point forward, they started to eat off of the wrong tree. And it has become the default for us to eat from this same tree ever since.

An interesting point Mark brings out is that the serpent told them they would be like God when they already were like God, created in His image (Gen.1:26).

“For God knows that in the day you eat of it
your eyes will be opened,
and you will be like God, knowing good and evil.”
(Gen.3:5 NKJV)

Their problem was not that they wanted to be like God, they already were. But, like the rebellious prodigal son or his religiously dutiful brother, they didn’t know who they were, what they had, so they were open to counterfeit affections. So they decided to leave a life in their Father’s embrace, trusting another voice over His.

So they ate from the tree that would make them want to place their life in their own hands instead of His hands.

And we are open to this same deception if we don’t know who we are as beloved sons of our Father in Christ.

Because, for us, even though this Tree of Life is living in us as believers, we can still prefer to eat from the Tree of the Knowledge of Good and Evil. We can still prefer to play God in our own life, and other people’s lives, instead of letting God be God in everything.

So what does eating from the wrong tree and ‘trying to be God’ look like for us? Here are just a few examples. There are some similarities to those I gave in my other post…

– It’s trying to attain to righteousness instead of obtaining it as a free gift (Rom.5:17)

– It’s trying instead of trusting in anything…

– It’s relying on our ability to figure things out in our head instead of His (1 Cor.2:16)

– It’s withholding love unless others meet our conditions

Of course, I could on and on.

The revelation we all must face at some point in our life, and not forget, is that we want to make everything all about us, our needs, what we’re going through, what others have done to us–no matter how humble we may want to sound, how pious we may look, or any of the other ways we may dress it up.

Our tendency is to regulate God’s involvement in our life, and we usually prefer to control others instead of ourselves. We’re uncomfortable with others unless they think like us. We do actually want God and what we think He can give us, but we want Him on our own terms.

I know this comes across a bit harsh, and it is, but being open to and awakened by the truth is the pathway to true freedom. 🙂

And this litany of woundedness that exposes our dysfunctional need for self-affirmation is not meant to give opportunity to grovel in shame and self-condemnation but, by contrast, revel in the bright light of the staggering good news offered to us with our new life in Christ! It’s truly liberating and transformational. For we are given the opportunity to leave the dank dungeon where this orphan Tree grows, that feeds our soul’s propensity for self-worship, and walk under the restful shade of the “exceedingly abundantly above all that we ask or think” freedom that comes from living Christ’s very own life!

Beloved, the antidote is living in you! Open your heart, let the Father’s love overwhelm your soul and feed it on Christ’s life. For He is the Tree of Life that brings healing to us and to the nations.

God's favorite (and so are you), a son and a father, happily married to the same beautiful woman for 41 years. We have three incredible adult children. My passion is pursuing the Father's heart in Christ and giving it away to others. My favorite pastime is being iconoclastic and trailblazing the depths of God's grace. I'm also senior pastor of Cornerstone Church in Wisconsin.
View all posts by Mel Wild →
This entry was posted in Faith, Freedom, Grace and tagged Christianity, self-worship, transformation. Bookmark the permalink.

13 Responses to Eating from the wrong tree