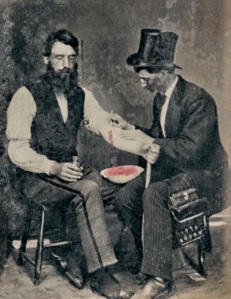 Would you think that nineteenth century medical science was all there was to know about medicine?

Perhaps we should attempt space travel with the Medieval understanding that the sun most certainly revolves around the earth?

Would you like the medical knowledge and technology of those worlds instead of what we have today? Why not?

Of course, no one would. That would be considered absurd.  But this brings me to my point.

While we wouldn’t want our blood drained to reduce a fever (called “bloodletting”) or fly into space with Da Vinci’s advancements in science,  we seem to think that this same mindset about doctrine and our understanding of the Kingdom of God is quite okay. And anyone who challenges our several centuries old dogma we dismiss as a heretic. To me, this is absurd. 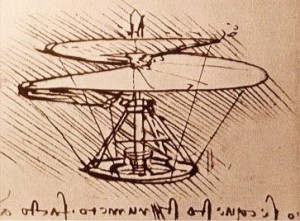 Do we want the limits of our relationship with God set by the post-Medieval understanding of the Reformers? Has God not spoken to anyone since then?

And while God’s Word never changes, shouldn’t our understanding of His unchanging Word continue to advance?

So why should we treat our assumptions about the Word of God differently than how we understand anything else? Can we just admit that what we call “truth” is really our best interpretation of the Truth. It doesn’t make it wrong, or necessarily in need of change, but if we’re going to be honest followers of Christ it must be considered subject to better understanding.

And if we think our interpretation of Scripture is infallible, don’t we just become unteachable fools? Just saying… 🙂

True humility requires the willingness to change and remain teachable. The Pharisees were rigid in their theological conclusions and they crucified their long-awaited Messiah. Rigid is not good when it comes to understanding God and growing up in Christ.

Otherwise we end up canonizing interpretations of men, whether they be the Reformers, or any other pioneer of the faith, making their “truth” the standard by which we measure the Truth, instead of what the Scripture actually says.

Our “Bible” becomes the Bible plus our commentaries. “Bible-believing” becomes what we’ve been taught to believe about the Bible, which we enshrine and encase in dogmatic stone.

We exalt our training, our confessions, our evangelical heritage, over being “filled with the fullness of God” and “the love of Christ which passes knowledge” (Eph.3:19). In light of this reality, doesn’t our myopic dogma inevitably lead us into religious idolatry?

Let’s look at the progression of orthodoxy for a moment. 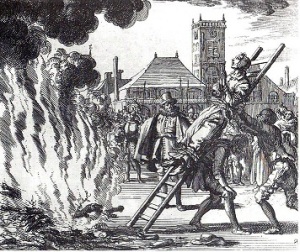 A 16th Century Anabaptist burned as a witch by the Spanish Inquisition: Wikipedia

The former heretics become the new venerated fathers of the faith. The Reformer’s heresy of the sixteenth century becomes the evangelical orthodoxy for future generations to follow in lockstep.

And the former move of God persecutes the current move of God. Anyone who dissents from the “accepted” doctrinal conclusions must be swiftly judged a heretic and a cult!

Nothing new under the sun.

But isn’t our unwillingness to change, or be disagreed with, based in fear rather than love? Haven’t we drawn our doctrinal boxes around God so that we can maintain a sense of control over something that, in reality, is uncontrollable?

Fear seeks to control to maintain a sense of security and self-preservation, but love seeks to understand because its security is found in its identity. The Father’s love brings affirmation and sonship, and this love casts out all our religious orphan fear. (1 John 4:17-21)

For these insecurities also protect us from the awesome mystery and wonder of God, and inevitably leads us to put our entrenched doctrinal position before relationship with God and with each other–which again, is idolatry.

Can we just admit that we don’t know everything, that we haven’t arrived, that we’re still in need of reformation, and be okay with changing and growing in our understanding of God and His Kingdom?

And I’m not a total deconstructionist. I’m not saying that we should dismiss our evangelical foundations, but that we should build upon them and advance beyond them.

Yet, there are things we probably shouldn’t do or believe anymore. Just like we don’t use bloodletting anymore to reduce a fever, we should probably jettison some of our outdated Post-Medieval theology (meaning, outdated interpretations), especially, anything that disempowers the pure message of grace, confuses our true identity in Christ, makes God silent and powerless, or pushes the Kingdom of God off until the next age.

Beloved, the Kingdom of God is always advancing, let’s advance with it. Let’s stop being driven by fear and manipulation by those who refuse to change. The Holy Spirit knows what He’s doing! We don’t have to fear change. What we should fear is our propensity to keep God in our religious coffin.

If we serve a God Who is “able to do exceedingly abundantly above all that we ask or think” (Eph.3:20), don’t you think we still have a lot to see and learn?

For when it comes to our understanding of God, and all He has for us as His beloved, change is here to stay. And that’s a good thing.

God's favorite (and so are you), a son and a father, happily married to the same beautiful woman for 41 years. We have three incredible adult children. My passion is pursuing the Father's heart in Christ and giving it away to others. My favorite pastime is being iconoclastic and trailblazing the depths of God's grace. I'm also senior pastor of Cornerstone Church in Wisconsin.
View all posts by Mel Wild →
This entry was posted in Doctrine, Reformation, The Shift, Theology and tagged Bible, Christ, Christianity, Heresy, HolySpirit, Kingdom, Pharisees, Reformers. Bookmark the permalink.

7 Responses to New technology, arrested doctrinal development, and the advancing Kingdom of God