Buzz Aldrin, walking in space, and crucifying the flesh 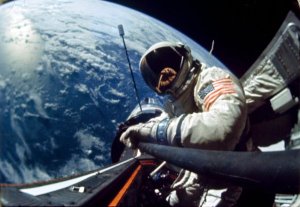 What can Buzz Aldrin teach us about walking in the Spirit?  Perhaps, a lot.

I recently watched a NASA documentary about how this astronaut first proved that man could work in the environment of space. It was the 1966 Gemini 12 mission. Three previous attempts to perform specific tasks outside of the space vehicle (called “EVA’s) had failed.

How did Buzz Aldrin easily and effortlessly succeed where others had failed after much struggle and almost near death experiences?

He learned how to operate under the new rules of zero-gravity before he ever stepped out of the safety of his earth-conditioned space capsule.

And this is what Buzz Aldrin can teach us. The same is true for us if we are going to learn how to operate in God’s space–the realm of the Spirit.

I often hear sincere believers talk about how they struggle with trying to “crucify the flesh” and “dying to self.” I’ve been there too.  Describing this constant struggle is often met with a hearty “amen!” from the faithful.

But like with Buzz Aldrin’s experience, it turns out to be a needless struggle.

Our struggle is in our perspective. It’s hard because we make it hard. We’re not seeing ourselves the way God sees us. We still believe lies about our identity. We’re still trying to fight something that God has already conquered,  empowering what God already disempowered and nailed to the cross with Christ–namely, our old nature.

We still struggle because we’re still operating under the rules of the earthly realm instead of the heavenly realm.

Because walking in the Spirit should be as effortless as having a thought.

So, instead of struggling and fighting the crucified “you” (Gal.2:20) that’s dead and buried, wearing yourself out, why not learn how to operate in your “weightless” identity in Christ, where this “earthen” atmosphere no longer holds you down, gliding effortlessly in God’s space, the realm of the Spirit?

Don’t believe me? Let me ask you. Did Jesus struggle to kill His flesh? No. Jesus was tempted, but He didn’t struggle. There’s a difference. And, yes, He suffered for our sins but that’s not what I’m talking about.

You may protest, “But He was God!” Yes, but remember that He denied His God-hood, if you will, and became like us (Phil.2:5-8). To use my Buzz Aldrin analogy, Jesus just knew how to effortlessly walk in “God-space.”

And this may come as a shock to our religiously trained minds, but as Jesus is now (after  the cross), so are we in this world (1 Jn.4:17). But just like how the power of thrust overcomes gravity, even allowing us to go into space, there are laws operating in the Spirit that easily and effortlessly overcome the laws of the flesh (Rom.8:2).

You can be certain that if you’re struggling to crucify the flesh or die to self, you’re operating under the wrong rules. You’re using earthbound principles to navigate heavenly places.

You see, walking in the Spirit is the only antidote to the flesh. It’s never about trying to make our flesh behave, it’s always about seeing it as dead and disempowered and our new life empowered by the Spirit. It’s not trying to even live under the old, but “putting on” the new like a coat.

But it’s so counter-intuitive. Like the Chinese finger trap, you must do the opposite of what your earthbound mind thinks should be done.

What are the rules of realm of the Spirit? In one word–faith.

Paul expounds on this one rule in Romans 6:2-14. Our faith involves three things: we must know, consider (or “reckon”) and present. And all three requires faith. No amount of discipline, self-denial, remorsefulness, or attempts at bringing your flesh into submission will work. That’s like trying to tame a dead horse. I elaborate on these three in a previous post (“Basic Math For Freedom in Christ“).

Walking by faith means to believe and rest, not work.

Believe means that we believe like God believes. We agree with His assessment of us and the world around us. We don’t make other things up. That’s called religion and unbelief.

Rest means we stop trying to do something God has already done.

Nothing else matters until we get these points. And until you get them, you will probably struggle.

Walking by faith, which is what a “normal” Christian does, means walking by the rules of our new nature in Christ.

The Bible says we will have what we believe (Mk.11:23-24). Whether we think we will succeed or fail is a self-fulfilling prophecy. This is not “hyper-faith,” this is faith 101 taught by Jesus.

As soon as we believe the right things, it begins to become effortless and easy.  Although, it does take learning how to walk under these new rules of the Spirit.

God's favorite (and so are you), a son and a father, happily married to the same beautiful woman for 41 years. We have three incredible adult children. My passion is pursuing the Father's heart in Christ and giving it away to others. My favorite pastime is being iconoclastic and trailblazing the depths of God's grace. I'm also senior pastor of Cornerstone Church in Wisconsin.
View all posts by Mel Wild →
This entry was posted in Faith, Freedom, Identity and tagged Buzz Aldrin, Christianity, Jesus, Normal Christianity, Religion and Spirituality, The Normal Christian Life, Walking in the Spirit, Watchman Nee. Bookmark the permalink.

2 Responses to Buzz Aldrin, walking in space, and crucifying the flesh