Why do we have such a problem with freedom? 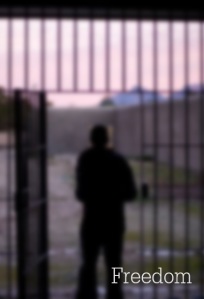 Why are Christians so worried about actually being free?  This is one of the strangest things I’ve ever pondered. We seem determined to live bound… by religious rules, by behavior modification…instead of by the freedom of the Spirit.

I remember getting saved and freed from my sinful prodigal lifestyle. I was so full of joy and felt such freedom. But then I went to “church” and set out on this absurd pilgrimage to “behave” like a Christian. In no time at all, I was no longer free. I was now bound up in religion–no joy, critical, suspicious and judgmental. I was now living like the elder brother! That is strange indeed.

Here’s what Wendell McGowan said about this strange phenomenon (“Firewalker: Living in the Third Heaven“)…

“The truth today is that the Church still argues over law and grace…Living under the law is like living in a jail cell. If you stay there long enough, you begin to adapt to the bars of punishment that insist that you abide under the rules. Grace opens the bar doors! Once the doors have been opened, this is where many people get stuck. They are so accustomed to rules, that to have freedom is too unfamiliar, and they run back looking for a false sense of security found in the law. Now, if we stay in grace long enough for it to penetrate our hearts, the love of God will be released.”

I’ve found that whenever the subject of freedom from the Law comes up,  insecure people freak out and say things like, “If we don’t have rules, people will just do whatever they want!” You can’t have that, right?

And I’m NOT suggesting having freedom to sin. In fact, I am suggesting that the only power we actually have to live a godly life is by His empowering grace (Titus 2:11-12), exercised by faith working through love (Gal.5:6). You only need rules and control when you don’t have this. And that’s still not living like a biblical Christian; that’s living like a religious orphan.

We’re a lot like the “foolish Galatians” (Gal.3:1-3). We seem to know how to get freedom, but we don’t seem to understand how to live in freedom. Because living in freedom requires abiding in His love (Jn.15:1-12). And we’re more comfortable living within the confines of rules…like a cage, separated from the Father like orphans…apparently, afraid of embracing this unconditional love that removes all torment and bondage (1 Jn.4:18).

The irony is astounding. We’ll do everything in our power to keep from getting what we really want!

Again, it’s because we just don’t trust. We would rather stay in control of our behavior. Better yet, focus on making everyone else behave!  We seem to think it’s our moral obligation. After all, if we’re not going to live in freedom, we’re certainly not going to let anyone live in it!

This is why getting saved so you can escape hell is a horrible way to enter into a relationship. That’s like a man demanding that his wife love him or else he will torture and kill her. Does that sound like a healthy relationship to you? But this is how Christians come to God everyday. It would be laughable if it wasn’t so pathetically sad.

Furthermore, if you’re trying to go to a place (heaven) to escape a place (hell), then you really don’t care who’s there. The whole point is escaping punishment rather than becoming His.

So, since we insist on living apart from God’s outrageous love and empowering Spirit, we are left with the powerless, lifeless, stainless steel religion of rules. That’s not freedom.

Is the absolute absurdity of this fruitless and frustrating and joyless endeavor getting through to you yet?

But the “good news that brings great joy” is that this is not the Christianity of the New Testament! In fact, Paul called that “another gospel” (Gal.1:6-9). Jesus is the only way to a Person, not a place (Jn.14:6). And He came to introduce us to a Father, who is love–to live exactly like He did, as a “son” in His Father’s presence, which means fullness of joy and freedom.

But our legalistic, orphan minds have twisted this around, turning it into some elusive standard of performance that locks us in our fear and self-condemning insecurities.

But you cannot have love without freedom. So, beloved of God, it was for this freedom that Christ set you free (Gal.5:1). And free people don’t live like slaves who must obey or else. They “obey” like lovers who would do anything to please the other, the object of their greatest affection.

It’s time we were okay with freedom.

God's favorite (and so are you), a son and a father, happily married to the same beautiful woman for 41 years. We have three incredible adult children. My passion is pursuing the Father's heart in Christ and giving it away to others. My favorite pastime is being iconoclastic and trailblazing the depths of God's grace. I'm also senior pastor of Cornerstone Church in Wisconsin.
View all posts by Mel Wild →
This entry was posted in Freedom, Grace and tagged Christianity, Faith, Grace, Holy Spirit, Jesus, Legalism, Love of God, Religion and Spirituality, Sin, Wendell McGowan. Bookmark the permalink.

11 Responses to Why do we have such a problem with freedom?